Businesses have until September to feed back on the plans, but critics say this doesn't give them enough time 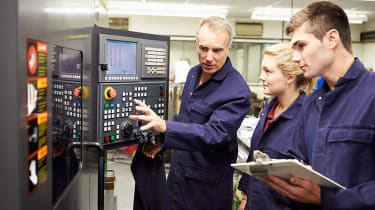 The government has announced more details of its apprenticeship levy, revealing businesses have until September to feed back on the plans before it's formally introduced in 2017.

The initiative allows small businesses who do not have the training budget for apprenticeship schemes to apply for funding from the government, to the tune of 90 per cent of the costs in order to boost the UK's skills in certain areas, such as technology.

Although the levy would potentially help small businesses train up more skilled workers, many fear that introducing the plans in April next year, as is currently being suggested, is too soon and more discussion needs to be had with small businesses to reassure them.

TechUK's director of policy, Charlotte Holloway, praised the government's plans, saying they will give technology companies the reassurance that the government has listened to their concerns, ensuring they can invest in the skilled employees of the future without losing vital revenues.

"However, there are still a number of unanswered questions, including on the operation and makeup of the Institute of Apprenticeships," she added.

"We also encourage the Government to reconsider including digital skills alongside English and Maths in minimum standards required for all new apprenticeships created over the coming years."

The government said the revised plans mean people of all ages and backgrounds will now have access to the skills they need to be successful in their careers, and perhaps pursue a career in a field they previously thought was impossible.

"I strongly encourage employers to get involved and ensure that this extensive new offer fully meets their needs, as it can provide the much needed injection of confidence and certainty in the skills agenda, which is needed now more than ever," Petra Wilton, the Chartered Management Institute's (CMI) director of strategy, said.

However, some industry groups think the levy still needs some work before it is easy to be launched in 2017.

"Without a radical rethink it could damage not raise training quality. This really matters because of the crucial importance of closing the skills gap to improving the UK's lagging productivity."

She added that the levy is too narrowly defined, and employers can only claim costs associated with their apprentices not working, meaning it could still cost small businesses money. Fairbairn explained the plans to start the scheme in April gives businesses little time to prepare and urges the government to delay implementation.

"Though business understands the fiscal challenges, it would be a great mistake to rush ahead before a viable scheme is ready," Fairbairn said.

"We urge the new Secretary of State to take a step back from the political timetable and consider what is best for building the skills of our young people, to enable the UK to become a high-skilled, high-productivity economy. Business stands ready to work with Government to build a system that delivers for the future and from the outset."

Those wishing to submit their views to the government regarding the proposed levy can do so here.