Daimler says your car should be your office, too 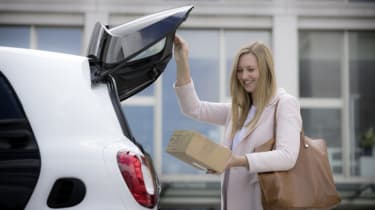 Daimler wants to turn cars into a road-warrior office, making it easier to get work done when stuck in traffic, as well as letting cars park themselves and act as mobile mailboxes.

Getting stuck in traffic can jam our inboxes with missed calls and messages unless drivers break the law and fiddle with their smartphones on the road, noted Daimler chairman and Mercedes-Benz Cars CEO Dr Dieter Zetsche, speaking at IFA in Berlin.

The maker of Mercedes and Smart cars hopes its tie-up with Microsoft will change that, introducing an In Car Office system that integrates with Microsoft Exchange to pull calls, directions, and other key data into the vehicle.

"It knows about your next phone conference and dials you in while in the car," Zetsche said.

The system will be introduced in new Mercedes models from mid-2017. Productivity apps aren't the only target: Daimler is already testing Chinese social network WeChat, so expect others such as Facebook to follow suit. Zetsche said it was "no secret" people use their smartphone apps while driving, so integrating it into the car enables that to be safe and legal.

"Once the car does more driving, there's no reason not to do video conferencing and Skype," he added. "The more work you do on the road, the less time you can spend in the office."

The In Car Office is one step towards self-driving cars, Zetsche said, making cars a "quality time machine" that helps claw back hours spent on your commute.

Alongside office productivity, Daimler is introducing a host of new tools to make cars work harder for their owners - even when they're not in them. One is a new personal assistant app, Mercedes Me, that includes two intriguing technology trials.

The first uses data collected by all Mercedes cars, which scan streets for parking spots as they're driven around. That data is gathered together and shared out to all Mercedes drivers to help them find a place to park.

That's already being trialled, but it's not the end of the idea. "If your car knows where that space is, why shouldn't it just drop you off at the entrance and drive there itself?" he asked, saying self-driving cars could head to the location on their own and use existing automatic parking systems to slot themselves into the spot. "Parking will simply not be an issue in your life any longer."

Another bit of stress Daimler hopes to cut out of our lives is missed packages. The company isn't yet suggesting you send your driverless car off to the store on your behalf, though Zetsche believes that could happen in the future. Instead, it is trialling a system to let couriers leave packages in your boot, so long as you're parked on a public street.

Order your package from Amazon or other retailers, and the courier will drop it off in the boot of your car. That's possible via a connectivity box that will be installed in the back of Smart cars, letting couriers find the vehicle. The boot will be unlocked via a secure access system similar to that used by Daimler's Car2Go car sharing system, with your package ready and waiting when you arrive to commute home.

Trials of "Smart ready to drop" will run this autumn in Stuttgart with DHL, and expand to other German cities and Mercedes vehicles soon.

Such ideas are meant to make cars more useful to their owners, but Zetsche said innovations like self-parking or on-road offices are small compared to the time-savings that will come with driverless models. "Fully self-driving cars will be the greatest upgrade in the history of the car," he said.