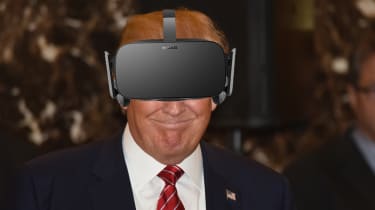 Palmer Luckey is planning on launching a new startup that is developing surveillance technology which could be used on country borders and around military bases.

A report by the New York Times highlighted how a technology adviser to Trump, Peter Thiel, is planning to use an investment fund to support the company set up by Oculus Rift founder Luckey.

Luckey said to the newspaper: "We are spending more than ever on defense technology, yet the pace of innovation has been slowing for decades," he commented in an email. "We need a new kind of defense company, one that will save taxpayer dollars while creating superior technology to keep our troops and citizens safer."

Three people familiar with the plan told the New York Times that Luckey's startup aims to use a technology found in self-driving cars called lidar, as well as infrared sensors and cameras to monitor borders for illegal crossings. The technology can potentially be used for different types of perimeter security and could even be used to detect drones. The software would aid the system in determining what to ignore, such as animals. The system can be mounted on telephone poles and is more cost effective than Trump's proposed wall on the Mexican border.

Chris Dycus and me at the very start of Oculus! Lots of great stories that should be told. pic.twitter.com/DcEafRQLOO

Luckey's company is currently based in Southern California and is being self-financed by him for now. Recent hires include Christopher Dycus, Oculus's first employee.

Thiel's investment firm Founders Fund intends to invest in the startup, according to people with knowledge of the plans.

Luckey previously donated $100,000 to Donald Trump's inaugural committee through one of his companies in April. Prior to that, Luckey admitted to funding a pro-Trump lobbyist group, Nimble America.

Palmer Luckey donated $100,000 to President Donald Trump's inaugural committee, making him one of the top contributors to the event.

According to a report by MotherJones on January 4, the committee received a $100,000 donation from a company named Wings of Time. An office tower in Los Angeles was meant to be the address for Wings of Time, but apparently there is no individual's name associated with the organisation.

It turns out that Wings of Time is registered in Long Beach instead, according to California corporation records, and it matches the address used by 24-year-old Luckey for different business projects.

The names themselves have a link. Wings of Time is a machine and Fiendlord's Keep is a location in a video game called Chrono Trigger, which is purportedly one of Luckey's favourite video games.

The largest donation to Trump's inauguration was the $5 million made by prolific GOP donor Sheldon Adelson. Luckey's donation is equal to other donors including Peter Thiel.

Last year Luckey came under fire for funding a pro-Trump lobbyist group. The Oculus co-founder was reported to be the financial backer of Nimble America which is "dedicated to shitposting in real life". The group was behind a billboard in Pittsburgh which had a picture of Clinton and the words "too big to jail" and a popular Trump related hashtag.

Palmer Luckey has admitted to funding a pro-Trump lobbyist group.

The Oculus founder was revealed to be the financial backer of Nimble America, The Daily Beast reported, a non-profit organisation which is "dedicated to shitposting in real life".

'Shitposting', for those not up-to-date with their internet shorthand, refers to a brand of social media and forum behaviour characterised by deliberate trolling, using an overabundance of memes and generally behaving in a way that many may consider childish and objectionable.

The group claimed to be behind a billboard in Pittsburgh, which featured a picture of Clinton captioned with the words "too big to jail" and a popular Trump-related hashtag.

A Reddit user by the name of NimbleRichMan - which Luckey confirmed to the Beast was in fact him - posted an AMA on the Donald Trump subreddit promising that he would match any donations to Nimble America for a 48-hour period.

Both the Reddit account and the associated AMA have now been deleted, but a cached copy of the page reveals that Luckey is an outright supporter of Trump. He was personally endorsed by infamous right-wing journalist Milo Yiannopoulos, who spoke of "his passion for Donald Trump and the Trump movement".

"You and I are the same. We know Hillary Clinton is corrupt, a warmonger, a freedom-stripper," NimbleRichMan wrote. "Not the good kind you see dancing in bikinis on Independence Day, the bad kind that strips freedom from citizens and grants it to donors."

"I have supported Donald's presidential ambitions for years. I encouraged him to run in the last election, but the overwhelming power, resources, and institutional advantages available to a sitting President made it almost impossible."

A post by well-known Trump Redditor TehDonald also suggested that the reason behind Luckey's support of Nimble America was that the Federal Election Commission wouldn't allow him to donate any more money to Trump directly.

According to The Daily Beast, Luckey's rationale behind his support of the group is that "I thought it sounded like a real jolly good time". Polygon reported that representatives from Luckey's company had no knowledge of the affiliations.