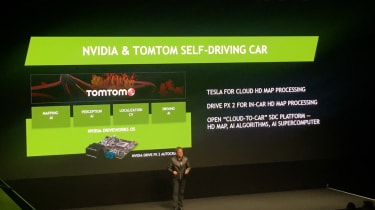 Announced by Nvidia CEO, Jen-Hsun Huang, at firm's GTC Europe conference in Amsertdam today, the deal will combine TomTom's HD map coverage, which already spans more than 120,000 km of highways and freeways, with Nvidia's Drive PX2 computing platform to accelerate support for real-time in-vehicle localisation and mapping for driving on the highway.

"Together we will create a cloud and car platform for the western market," said Huang. "TomTom has mapped a very large part of the world as you know, they are one of the world's greatest mapping companies, their services are used by almost everyone."

He explained that as TomTom maps the world the company is collecting video which is being processed internally and turned into a high definition map.

"That processing is enormous; it is the grand challenge of supercomputing, to literally record the world and turn it into an HD map," said Huang.

"It is a computational challenge of extraordinary conventions, recognising length, structures, objects, cars, and turn the whole thing into a 3D map and has to be accurate within a few centimetres."

He added: "All of that processing is done in their product, and we're teaming with them to accelllerate that processing so it can be superfast and we can continuously crunch that data in the future and turn it into 3D maps."

Together, the companies will develop a cloud-to-car platform comprising of HD map in the cloud, AI algorithms,  localisation algorithms and an AI super computer for the car.

"This collaboration is an important step for TomTom," added TomTom's Willem Strijbosch, head of autonomous driving.

As part of the announcement, Nvidia said its DriveWorks software development kit now integrates support for TomTom's HD mapping environment, and the open solution is available for all automakers and tier 1 suppliers developing autonomous vehicles.