The organisation includes Amazon, IBM and Microsoft, but Elon Musk and Apple are both absent 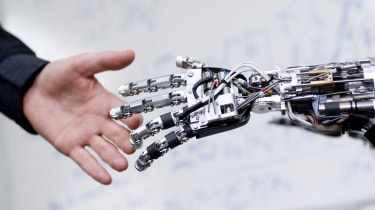 An industry-wide organisation including five Silicon Valley giants has been formed to promote the fair and ethical development of artificial intelligence technologies.

The organisation aims to "conduct research, recommend best practices, and publish research" rather that directly lobby legislators, and will focus on "ethics, fairness and inclusivity; transparency, privacy, and interoperability; collaboration between people and AI systems; and the trustworthiness, reliability and robustness of the technology".

The group - known as the Partnership on Artificial Intelligence to Benefit People and Society - includes Facebook, Google, Amazon, Microsoft and IBM, with academic and non-profit organisations expected to join in the near future.

"Over the past five years, we've seen tremendous advances in the deployment of AI and cognitive computing technologies," said IBM AI ethics researcher, Francesca Rossi, "ranging from useful consumer apps to transforming some of the world's most complex industries, including healthcare, financial services, commerce and the Internet of Things."

"This partnership will provide consumer and industrial users of cognitive systems a vital voice in the advancement of the defining technology of this century - one that will foster collaboration between people and machines to solve some of the world's most enduring problems - in a way that is both trustworthy and beneficial."

The five member companies all have sophisticated and well-known AI research divisions working on the technology. Amazon this week launched its AI-powered smart home assistant, the Amazon Echo, in the UK, and Google's DeepMind AI subsidiary made headlines earlier this year by beating the world champion at notoriously complicated Asian board game Go.

There are some notable holdouts from the project, however. OpenAI, which was co-founded by Elon Musk, does not appear to be part of the partnership, despite the fact that the two group's goals would at first glance appear to be highly complementary.

OpenAI is focused on the "positive human impact" that AI can have, with the organisation stating that "We believe AI should be an extension of individual human wills and, in the spirit of liberty, as broadly and evenly distributed as is possible safely".

Also not participating is Apple, which has been increasingly touting the sophistication of its digital assistant Siri. The AI-based system is now available across all of the company's devices, with an open SDK allowing developers to integrate it with their own apps, as well as Apple's stock software.

According to senior Partnership figures, however, the firm may not be absent for much longer. Eric Horvitz, managing director of Microsoft's primary research lab and one of the group's two interim co-chairs, said "we've been in discussions with Apple," according to The Guardian, adding "I know they're enthusiastic about this effort, and I'd personally hope to see them join."