'Breaker one-nine, looks like we got us a (self-driving) convoy...' 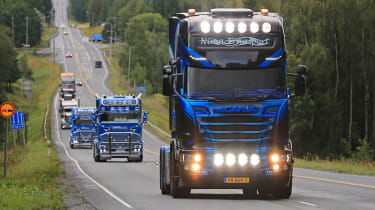 Uber is planning to establish a long-haul freight transportation service using self-driving trucks, it has emerged.

The company recently purchased Otto, a startup focused on building tech to retrofit existing trucks with self-driving technology. Today, it became clear that Uber doesn't just want to use that tech for self-driving taxis.

Instead, it will directly target the $700 billion trucking industry, applying Uber's signature business model to the haulage market. Otto co-founder Lior Ron told Reuters that the company was making connections with independent truckers, and plans to more than double its current fleet of vehicles, to a total of 15.

The company's test trucks can currently operate autonomously on interstate highways (albeit with two backup drivers in case of emergencies), but full automation is still several years away and the company stresses  it is still in the testing phase.

However, Uber is aiming to use its other areas of expertise to shake up the sector too. According to Otto, more efficient mapping, tracking and navigation software can make long-haul trucking cheaper and more efficient.

One of the company's key ambitions is to replace the industry's brokers - the middlemen who connect carrier fleets with shippers who need goods transported. The company is hoping to accomplish this using similar technology to the system that connects drivers and passengers in its existing ride-hailing service.

"In Uber, you press a button and an Uber shows up after three minutes," Ron told Reuters. "In freight... the golden standard is that it takes [the broker] five hours of phone calls to find your truck. That's how efficient the industry is today."

The news follows George Osborne's announcement earlier in the year that similar autonomous lorries are to be trialled in the UK.