Dell EMC gears up for industry 4.0 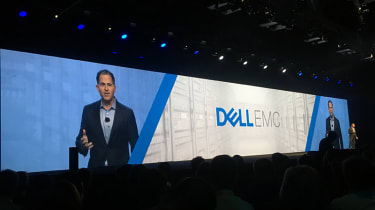 Michael Dell is the latest tech luminary to talk up the importance of the cloud and IoT in "the next industrial revolution", and the key role he believes Dell EMC will play.

Speaking at the opening keynote of Dell EMC World in Austin, Michael Dell said: "We're going to be the trusted provider of essential infrastructure for the next industrial revolution. If you're going to transform to embrace the digital future, we're the place to come."

This will be achieved by aligning all the capabilities of the newly minted Dell Technologies family, which includes RSA, Pivotal, SecureWorks, Virtustream, VMware and Dell, as well as Dell EMC.

Pivotal in particular has a key role to play in Industry 4.0 it would seem.

"When I think of an organisation and a leader that's really leading the way in this industrial digital transformation, it's GE, " said the Dell Technologies CEO.

Via video, Jeff Immelt, CEO and chairman of GE, said his company had outsourced a lot of its IT, which ended up being detrimental. However, investment in Pivotal Cloud Foundry managed to turn that trend around, which, Immelt said, propelled the company from being purely industrial to a digital and analytical business.

"For loads of companies like GE, Pivotal Cloud Platform is the platform for their digital applications ... [for] the cloud and the internet of things. And it's really at the heart of their digital transformation," said Michael Dell.

Dell once again talked up the benefits of Dell Technologies being a private company, saying that being free of the obligation of regular reporting and other trappings of public trading allowed the firm to plan for the long term, with plans that span decades, rather than quarters.

Additionally, while the size of the loan believed to have been taken to buy EMC has been raised as a potential millstone for the firm, the CEO claimed the company pays less in debt than competitors do in dividends and share buybacks.

Finally, he sought to assert the unity of Dell Technologies and Dell EMC.

"We are one company," he said, "please think of us as such."

Dell EMC World takes place from 18-20 October. Features editor Jane McCallion is on site reporting throughout  click here for all the latest news as it happens and follow her on Twitter for live updates.