The pay gap is equivalent to 5,000 per year, and is larger than the 8% evidenced in the US, Canada's 7% and the 5% gap in Australia, according to tech recruitment firm Hired's data.

The company analysed 10,000 job offers made to 3,000 candidates across 750 companies, releasing the research two days before Equal Pay Day, effectively the day when women start working for free until the end of the year, according to equal pay charity, the Fawcett Society.

"A possible hypothesis for this is that these companies aren't big enough to be subject to regulation like larger companies, but they are too big to have the same level of transparency across all hiring managers and divisions that a smaller company has," Hired's report read. 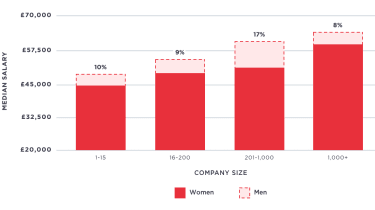 In software engineering, women entering the tech sector earn 7% less than their male counterparts, a gap that rises to 10% for candidates with between two and six years of experience.

Beyond that, the gap rises to 31%, Hired's data demonstrates. While men's salaries match their expectations, rising to 65,000 with seven years' experience, women's plateau at around 53,000. 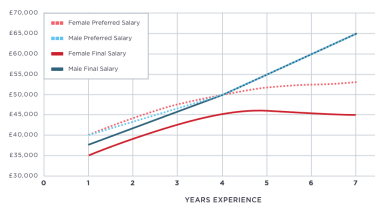 However, Hired found that when women ask for as much as men, they are generally paid that wage. "One of the most important conclusions from this report is that women who know their worth in the interview and job searching process can command a salary on par with men," Hired's report said.

But it also advised companies to use data to work up a salary offer based on the candidate's market worth, rather than their previous salary, which may have been biased. Training and regular salary audits should back this up to ensure a company is closing the gender pay gap.

"By publishing these findings, our hope is to encourage open conversation and debate around this issue. We want to encourage employers to reflect on their own compensation policies and identify possible issues of gender bias that may be present within their organisations," Hired wrote.

"We also want to provide data that empowers everyone to ask for their market worth and help them achieve it. The wage gap won't disappear overnight, but with information like this to hand we can work together to make a difference for the future."

Across all UK professions, women earn on average 13.9% less than men,  according to ONS data released late last month, just 0.2% lower than 2015.

Jemima Olchawski, head of policy and insight at the Fawcett Society, said: "Progress in recent years has been far too slow. The introduction of the national living wage, shared parental leave and forthcoming requirements on larger employers to publish their pay gap are welcome but it's clear we need a step change. That means creating more quality part-time work, encouraging men to play a greater role in paid and unpaid care work and ensuring employers with a gender pay gap have an action plan to address it."

IT Pro is running a series of features diving into the issues facing women in tech throughout November. Click here to see some of our latest coverage.