300 Fujitsu employees go on strike in Manchester to protest against jobs, pensions and pay 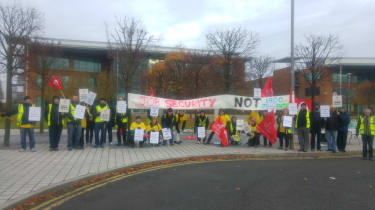 Around 300 Fujitsu employees are on a two-day strike in Manchester, following an ongoing battle over pay, pensions and job cuts.

The planned strike, which began at midnight on Monday, was first announced last week by members of the Unite union, who claim Fujitsu has been unfairly cutting wages despite generous increases to senior management pay.

Among the list of grievances was the claim that there is an estimated 16% pay gap between women and men, with female workers receiving an average of 5,500 less per year than men. Fujitsu has also enforced a ban on overtime since the 31 October.

Today's walkout follows news that the IT giant will cut 1,800 jobs, almost 18% of the workforce, across sites including Belfast, Crewe, Manchester and London. Unite claim there has also been a significant retrospective pension cut for staff over the age of 60.

"Today's strike has been strongly supported by our members and the message is getting out that our members won't be steam rollered into submission by the management," said Sharon Hutchinson, regional officer for Unite.

"Fujitsu is a highly profitable and successful company - its main UK subsidiary made 85.6 million profit last year and continues to be highly profitable," added Hutchinson. "So there is plenty of scope for the company to be positive in meeting our legitimate concerns on pay, pensions and job security."

"If the company continues its hard line, our members will continue to take industrial action in the run-up to Christmas that will severely impact on its customers, including those at Salford's 'media city'," said Hutchinson.

IT Pro reached out to Fujitsu for comment but has yet to receive a reply.

Workers staged a similar 24-hour strike on the 1 November over Fujitsu's refusal to become to become an accredited living wage employer. Fujitsu has implemented the statutory national living wage, however, it has since cut performance bonuses leading to an overall drop in take-home pay, according to Unite.