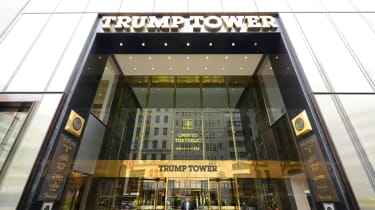 The future might look a little brighter for Silicon Valley, after Donald Trump struck a friendly and helpful tone during his meeting with the tech industry's biggest names, according to reports.

The President-elect summoned the heads of the country's biggest tech companies to a roundtable discussion, which took place at Trump Tower in New York - or the White House 2.0, as it may come to be known.

Many were expecting the meeting to be tense and confrontational. Trump had made a series of threats towards the tech industry and its major players, such as promising to go after Amazon for tax issues and force Apple to move its manufacturing operations back to US soil, but despite the fact that the CEOs of both companies were in the room, there was no sign of conflict.

In fact, Trump kicked off proceedings by waxing lyrical about the value of the tech industry, saying: "There's nobody like you in the world... this is a truly amazing group of people". He also promised that his administration will do everything it can to work with Silicon Valley.

"We want you to keep going with the incredible innovation," he said, promising that he and his people will do "anything we can do to help this go along... we're going to be there for you".

In what will doubtless come as a shock to many, the future President also took the opportunity to discuss policy ideas, including some suggestions which may prove downright revolutionary. According to the New York Times, during the closed-door portion of the meeting Trump spoke of the need for more vocational education (something that has been widely recommended as a way of closing the skills gap) and even asked about the possibility of using data science and analytics to identify and eliminate waste and inefficiency within the government.

Smaller, more intimate meetings are also said to be on the cards, set to be organised by Trump's son-in-law and advisor Jared Kushner and held quarterly. The main focus will reportedly be on the topics of education and immigration.

"Right now, everybody in this room has to like me," Trump said with uncharacteristic self-awareness, "at least a little bit". He appeared to be right; despite the fact that many at the meeting had backed Hillary Clinton, there appeared to be little conflict in the room. Amazon CEO Jeff Bezos in particular called the meeting "very productive".

"I shared the view that the administration should make innovation one of its key pillars, which would create a huge number of jobs across the whole country, in all sectors, not just tech," Bezos said following the discussion.

Similarly, Tesla CEO Elon Musk - whose progressive views on climate change would seem to contradict Trump's branding of global warming as a "hoax" - has been appointed to the President-elect's Strategic and Policy Forum, where he will be joined by Uber's Travis Kalanick.

However, if Silicon Valley's bigwigs are content to go along with the incoming administration, the industry's rank and file most certainly are not. More than 500 engineers, developers and other tech workers have signed a petition declaring that they will not participate in creating any database that could be used by Trump's government to target people based on religion, race or nationality. Trump has previously put forth the idea of using such a database to register and track Muslims in the US.

While many of the biggest names in tech were represented at the roundtable, one company was notable by its absence. Despite being the President-elect's communication method of choice and one of the biggest social networks in the world, Twitter CEO Jack Dorsey did not have a seat at the table.

Trump's staff told the media that it was simply an issue of space, with adviser Sean Spicer saying "the conference table was only so big". Anonymous sources told Politico, however, that this was a deliberate snub in retaliation for a spat over emojis during the campaign.

As part of a $5 million advertising deal, the Trump campaign allegedly wanted to use a custom emoji to replace the #CrookedHillary hashtag frequently used by Trump and his supporters, but it was personally blocked by Dorsey. This drew public condemnation from the campaign, who called it "BS" and said it was "incredibly reckless and dangerous".

The meeting also led to accusations of corruption and nepotism being aimed at Trump from numerous quarters. While space at the meeting was limited - "I won't tell you the hundreds of calls we've had asking to come," Trump boasted - he and his children made up a full 20% of the attendees.

Although the future president has claimed that his business affairs will be run by his children, they are clearly still being given access to important matters of policy, raising a possible conflict of interest.

The meeting was the first in what is likely to be a long, ongoing effort to work with Trump on behalf of Silicon Valley, but based on reports from this first discussion, there may still be hope for the US tech industry.