Team IT Pro offers up its tech highlights of the year 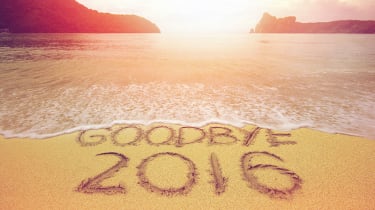 It has been a busy year in tech, with breakthroughs, gaffes and surprises scattered throughout the year. So we've put our heads together at IT Pro and come up with our top tech stories of 2016. Think we've missed something? Let us know in the comments.

One of the most ridiculous stories this year was the Galaxy Note 7 fiasco, which has been an ongoing issue for nearly three months and resulted in a recall of 2.5 million devices and a profit loss near $2 billion for Samsung. As equally ridiculous was the company's runaway PR campaign, which not only caused massive online backlash by trying to ban YouTube videos of the fault, but also accidently told a customer by text that they would intercept his attempts to go public, and even offended thousands of Chinese partners after offering an apologetic kneel on stage typically reserved for praying to a deity. Now Samsung is slowly throttling the Note 7 to death with a series of battery limiting updates - an undignified end to one of the industry's most disastrous products in history.

Google's AI division DeepMind made some of the greatest technology breakthroughs in 2016. Although not all of them are applied in real life situations yet, some could form the basis of revolutionary tools in the years to come.

For instance, DeepMind's collaboration with the NHS could have a huge impact on healthcare in the years to come in terms of faster, more accurate diagnosis and finding the best treatments for patients. The organisation also developed an AI that can lip read better than humans, in partnership with Oxford University researchers, which could have a significant impact on the production of subtitles for those with impaired hearing.

If it becomes even more accurate in future, this tool could also prove helpful for surveillance and anti-terrorism, although it could also have negative repercussions on citizens' privacy.

2016 hasn't been the greatest year, all things considered. From Brexit, to Trump, to the Snooper's Charter, it seems like virtually every major world event has been a disaster. There are, however, a few bright spots to take comfort from.

For starters, 2016 was the year when proper virtual reality technology finally hit shelves. The HTC Vive and Oculus Rift delivered on the promise of high-performance PC VR, while Sony's PlayStation VR brought it to the masses at an affordable price.

First-party hardware has been a similar high point. Apple's new MacBook Pro and iPhone units have continued to impress, and Microsoft's Surface Studio could be a genuine game-changer for creative industries.

2016 was something of a washout - but here's hoping that next year has a bit more to smile about.

Jane McCallion, Features Editor: The rise of the machines

After several false starts, the power of the IoT as a weapon for cyber criminals was finally revealed this year, when a huge botnet powered by smart dumb devices infected with the Mirai malware disrupted Dyn DNS and, separately, the website of security researcher Brian Krebs.

This may seem like a rather odd incident to call a tech highlight, but I hope it marks something of a turning point, with customers, manufacturers and vendors all realising the need for better security in the technology on which we increasingly rely every day.

2016 has been a year of doom and gloom so I'm firstly going to pick something that made me smile. And finding out that Morgan Freeman is the voice behind Mark Zuckerberg's AI assistant JARVIS did just that.

Outside of whimsy, a big highlight for me in 2016 was our amazing coverage during Women in Tech month. We showcased wonderful talent and shared amazing stories and it was well received by our readers and wider industry. A particular high during that month of highlights was our profile on Margaret Hamilton.

Yes, we did get some trolls joining in and making divisive and not very nice comments, during the month of focus, but we were very careful not to feed them.

Among all the VR gadgets, connected devices and headphone jackless smartphones that made the headlines this year, the biggest story of 2016 has been the ongoing battle over personal privacy in the west. With the FBI demanding Apple write a bypass for built in security for the iPhone, and the UK government finally passing the Investigatory Powers Act, this is essentially a battle between the state and the individual.

The problem is that, despite a proliferation of data breaches to the contrary, the individual doesn't seem to care. If they're not doing anything wrong, why should they mind if the government looks at their data, the argument goes. There's plenty of chapters left to run in this story, but in 2016, privacy campaigners and technology giants failed to make people care about this issue. With the EU's introduction of stronger privacy protection in the form of its incoming GDPR data protection regulation, maybe this will be different next year.