What will the next year hold for the world of tech? We put forward our predictions 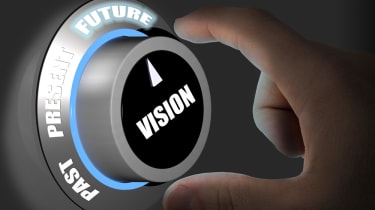 I have a feeling that 2017 will be better than 2016. It surely has to be, right? Technology will become even more of a differentiator in the 12 months ahead, resulting in greater competition among vendors for your precious IT budget.

I predict the use of advanced cloud-based technologies and virtual assistants (which are tipped to become the norm by 2019 anyway) will enable customer-facing organisations to deliver enhanced experiences and garner greater loyalty, which will intensify competition and, ultimately, benefit consumers.

Virtual assistants per se don't look set to threaten jobs IMHO (although there, quite rightly, remains huge debate about the wider impact of AI on the workforce). We all rely on the ones we have on our smartphones right now to help us out and save us time and they haven't superseded our need to still talk to other humans or resulted in mass unemployment.

Cyber attacks in 2016 involved some truly eye watering figures, none more so than Yahoo's 1 billion-account hack, but this ultimately translated to a simple password change for many users. But recent ransomware attacks on the San Francisco rail network and NHS computer systems reveal the potential for criminals to massively impact daily public life.

It's possible we could see an increasing number of vulnerable public services targeted by attacks next year. A company losing your data is one thing, but to find out your hospital appointment has been cancelled, or your local rail network has been knocked offline could cause complete turmoil. We could also see a surge in anti-ransomware preventative measures and, hopefully, investment in local IT infrastructure.

I think 2017 will be a particularly important year in terms of developments in Artificial Intelligence and machine learning. I expect that AI tools will become integrated with an increasing number of technologies, for instance cloud services, software for collaboration and apps.

I also believe more advanced AI tools will spread across all kinds of devices, from smartphones to home speakers, smart watches laptops to tablets and across a number of fields, ranging from business to healthcare, to research and entertainment.

I also think next year will be a decisive one in the implementation of innovative and surprising ideas, such as the 'Just Walk Out' technology behind the Amazon Go grocery store in Seattle.

2017 is going to be a very interesting year indeed. The political and economic effects from 2016's series of cataclysmic changes are only going to get more pronounced, which is going to have a knock-on effect on IT and business decisions.

Brexit, for example, is likely to keep impacting vendor and OEM pricing, which could drive smaller UK businesses into the arms of home-grown rivals. Of course, firms that are already in the grip of vendor lock-in will not have this option.

Similarly, the world's various industries and economies are waiting with bated breath to see how President Trump will affect the market. He could charitably be called 'changeable', and companies' stock prices have already begun to rise and fall based on his tweets. One late-night rant has the potential to tank a business' shares, which is going to prove tricky for his many adversaries within Silicon Valley.

Finally, we have the government's increasingly draconian grip on Britain's tech. The Orwellian Snooper's Charter passed with flying colours, although the effect of a recent EU ruling against it is yet to be seen, and the Digital Economy Bill looks set to continue this streak, giving the state even tighter control of our online lives. Emboldened by these successes, it would not be at all surprising to see the government passing further legislation in this vein.

All in all, 2017 is certainly going to be an eventful year if not a particularly pleasant one.

As cynical as I have been for the past several years about Internet of Things hype, I think this area of technology finally started to come into its own in 2016. With the likes of Amazon Echo and Google Home, IoT is starting to go from something that was only seen in specialist industrial applications or in the homes of a few tech enthusiasts, to something more everyday in nature.

In 2017, I would expect that trend to grow rapidly, with more dedicated hub devices like the Echo appearing in both home and office settings controlling an increasing number of smart peripherals (lighting, doors, aircon, heating). Naturally, new security threats will arise from this too and we will almost certainly see more IoT focused breaches and IoT powered incidents, like this year's Dyn DDoS, in the coming 12 months than we have before.

2017 will mark the start of companies making huge investments to bring their data protection policies into line with the impending General Data Protection Regulation, which comes into effect in May 2018.

Despite there being 18 months to go, businesses will start preparations early - it won't be easy for them to meet the EU's new stronger rules, with them having to potentially overhaul their consent models and employ a data protection officer, as well as upgrading their systems to quickly move or delete people's data if asked to. However, the investment is worth it - fines for failing to meet the GDPR laws run up to 4% of a business's global annual turnover, while it could still cost them 2% of that turnover if they suffer a data breach.