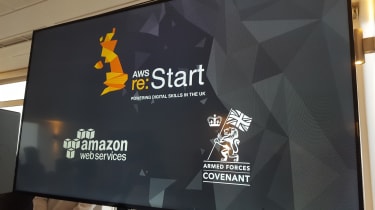 The AWS re:Start initiative sees the tech giant partner with the Prince's Trust and the Ministry of Defence (MoD) to provide re-skilling opportunities for young people from disadvantaged backgrounds and former soldiers who have left the military.

At a launch event in London on Thursday, AWS said it has partnered with "some of the most innovative companies in the country" to offer work placements, internships and job opportunities for those who successfully emerge from the training course".

Those companies include ARM, Sage, Cloudreach, EDF Energy, and Tesco Bank, all of which have already signed up to the initiative, promising to provide work experience for successful candidates.

"Accessing the new generation of talent is absolutely critical, so the initiatives we have seen today are a key part of the talent wells that we will tap into," said John Goodenough, VP of strategy at ARM Holdings.

"At ARM we have over 400 open job vacancies today, and for any business managing talent pipeline becomes an increasingly key part of what you do. You can't operate at scale without having that pipeline developed throughout the business, looking at all possible sources of talent and exploiting them."

Around 70% of large companies and 50% of SMBs are suffering tech skill gaps, according to a government report titled Digital Skills for the UK Economy, released in January 2016.

Gavin Jackson, AWS managing director for UK & Ireland, added: "AWS re:Start provides a foundation from which individuals no matter what their background will be able to restart their careers and build a new future for themselves, while playing an important role in contributing to the UK's digital workforce." 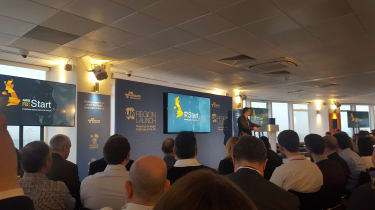 Training programmes will be entirely free and promise to provide skill development and job placements for 1,000 young adults and military service personnel.

The Prince's Trust will be responsible for managing the 'Get into Technology' scheme for young adults aged between 15 and 25 who are not currently in education. The course will last five weeks and include a two-week work placement, as well as training for "softer skills" to help those unfamiliar with daily office life to adjust.

The MoD retraining initiative will take place in Manchester and last four weeks, after which a work placement is offered at one of the partner companies. The Prince's Trust training will take place at an AWS training centre in London.

AWS will curate the content for the AWS re:Start programmes, and QA Consulting, which has been delivering AWS training since 2013, will handle both the training courses.

"In both cases the aim is to give them the skills they need, for the jobs of the future," added Jackson. "That means completing a free, intensive, full time training level course, which will provide a fundamental understanding of software development and cloud computing technologies - two of the most in-demand skills in technology today.

"Even those with no previous technical knowledge can sign up, and could end up being able to work in an entry level, technology based role."

Successful candidates will be offered roles in areas such as AWS sales support, AWS support engineering, junior software development, consultancy, or even supported to create their own business. Other companies did not specify what job roles would be available to graduates of the re:Start scheme.

The UK ranks fifth in the world for availability of digital technologies, but is 14th in terms of take up of those technologies. This, according to CBI deputy director general Josh Hardie, is a clear indication that industry needs to be playing a bigger part in the development of digital skills.

"If we know we want drive and productivity through all our regions more evenly, the number one way of doing that is through education and skills - that is the most significant determinant of a region's productivity," said Hardie.

"Relying on our schools and brilliant universities to produce these skills for industry will get us part of the way. But we need to make sure that we are stepping in and saying 'We know what skills we want, and we know that education centres have a role in this, but we know how to develop those skills, and we're going to find innovative and effective ways of making that happen'," added Hardie.

"From that perspective, that's a very clear and simple reason why this is an effective thing to be doing."

Secretary of state of culture, media and sport Karen Bradley described the initiative as a "fantastic" way of helping adults in the UK currently lacking digital skills, of which there are 12.6 million, according to Go ON UK statistics.

"Given the level and pace of change, we do not today have enough people with the digital skills that we need for the future," said Bradley. "This is an opportunity for people from all parts of the country and walks of life, to retrain so they can be part of a series of professions with incredibly strong career prospects."

The AWS re:Start initiative will launch in March 2017 and is already accepting registrations from potential candidates and companies interested in supporting the scheme.