Skip to ContentSkip to Footer 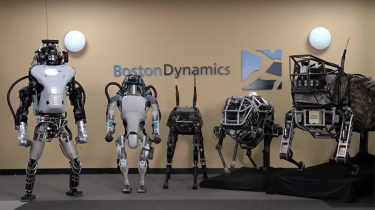 Boston Dynamics has unofficially unveiled a robot that it describes as 'nightmare-inducing' thanks to its leg and wheel combination.

Handle, as the unit is apparently called, is a cross between a Segway and the Atlas Robot, but the combination of wheels at the bottom of the legs make it more manoeuvrable. It also has two arms, although they weren't shown in use.

Boston Dynamics' founder, Marc Raibert, revealed the robot at the company's investor presentation and although it hasn't been officially announced, a video shown to those in attendance certainly does look a little scary. He introduced the video as "the debut presentation of what I think will be a nightmare-inducing robot".

Raibert said it's an "experiment in combining wheels with legs, with a very dynamic system that is balancing itself all the time and has a lot of knowledge of how to throw its weight around".

The wheels are more efficient for getting around compared to legs, meaning it can move faster, but the limbs make it more human-like, which is the part Boston Dynamics expects to scare people. The company explained Handle could be used in warehouses, zooming around and collecting items for shipments or delivering goods to a production line, for example.

The video was uploaded to YouTube by venture capitalist Steve Jurvetson who was watching the presentation with other investors. However, shortly after adding the video to the video streaming site, Jurvetson was asked to blur it out by Boston Dynamics. He did comply, but not before the web had transformed the video into animated gifs for all to see.

Boston Dynamics was acquired by Google's parent company, Alphabet in December 2013 when it was still operating under the Google name and although it tried to sell the company last year, with potential purchases rumoured as Toyota and Amazon, it would seem nothing came of it and Boston Dynamics is still innovating with new robotic ideas within Alphabet.