Elon Musk: Humans must merge with AI to survive 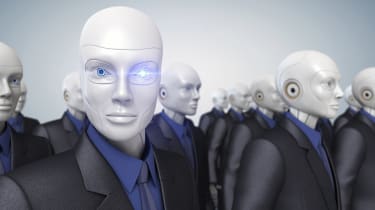 Tesla and SpaceX CEO Elon Musk has told conference attendees that humans must merge with AI if we are to survive against the dawn of the robot.

"Over time I think we will probably see a closer merger of biological intelligence and digital intelligence," Musk told an audience at the World Government Summit in Dubai, according to CNBC.

"It's mostly about the bandwidth, the speed of the connection between your brain and the digital version of yourself, particularly output."

He explained that AI presents quite a danger to humans because they can process data at speeds of a trillion bits per second, while humans can only process information at 10 bits per second. Our slow uptake of information could put us in danger and, therefore, Musk believes we must join forces with AI rather than work against it.

"Some high bandwidth interface to the brain will be something that helps achieve a symbiosis between human and machine intelligence and maybe solves the control problem and the usefulness problem," he added.

Unless you're a taxi driver, of course. Musk added: "We need to figure out new roles for what do those people do, but it will be very disruptive and very quick."