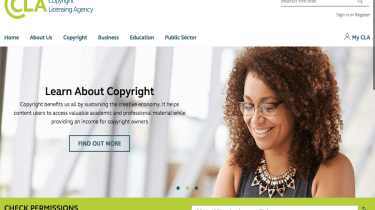 The Copyright Licensing Agency's (CLA) CIO Adam Sewell made the decision to go with Microsoft Azure as its cloud computing platform ahead of other cloud vendors such as Amazon Web Services (AWS) for "contractual reasons".

Sewell explains that, at the time when he was looking into a cloud provider, he found that "there were some elements that you'd expect in a contract that you'd get with Microsoft that you don't get with other leading cloud vendors".

He explained that the organisation was working with a development partner at the time who was implementing a solution for CLA, and it suggested using AWS.

"I sat down and read their terms for cloud services and did the same for Microsoft and a few other public cloud providers and I came to the conclusion that the one we could safely sign up for was a Microsoft contract," he explains.

Although Sewell declined to go into further detail about the specifics, he says that some of the contracts were worrying, particularly for small companies as they wouldn't be able to ask these major cloud companies to request changes to the default terms.

"A lot of people feel like they're stuck with [those terms], and therefore they've gone ahead and signed up for it without reading the small print and there are some real risks in doing that," he says.

CLA has just completed a new three-year IT strategy document which is aligned to its corporate objectives. It should build on what the organisation has achieved over the last few years.

This includes the launch of a new product called the Digital Content Store which more than 65 High Education institutions have signed up to, with 900,000-plus downloads of content from students.

"This product has really helped those institutions that have adopted it by simplifying the creation of digital course packs while reducing the administrative burden associated with our licences in that sector," Sewell explains.

The agency has also implemented UC-as-a-service, with its telephony being provided through the cloud-hosted Skype for Business product.

Sewell states that the organisation is a heavy user of cloud it even developed its own product a few years ago which was built on Azure Platform-as-a-Service (PaaS).

And, partly because of the heavy use of cloud, Sewell says one of his biggest frustrations is the overuse of the word cloud'.

"I think it's very frustrating that so many people working in IT refer to cloud when something is simply not hosted within their office. Vendors are just as guilty they call everything a cloud-based solution'," he states.

And his issues with the term cloud' don't stop there.

"We certainly found trying to recruit people with cloud experience is the biggest challenge. My frustration is that anybody can stick cloud' on their CV but when you ask them in an interview about their experience, they say they've used Office 365 or Salesforce," he says.

"While it is software-as-a-service (SaaS), and is cloud computing, it's not the same as having experience of supporting critical applications running on critical platforms," he adds.

Business analysts are also hard to recruit, Sewell says, and the challenge of recruiting the right people is getting harder particularly with banks being able to lure candidates with big pay packages.

The CLA has a lot of data about the 10 million-plus publications that are covered under its licences. It has tools to allow its customers to see whether they can copy anything over from any particular title and it also captures data about usage of those titles.

"Because we capture so much data across different sectors that we license, the way that data is captured varies considerably, so it's key to ensure we can capture and analyse all of that as efficiently as possible so we maximise the return back to the rights holders," he adds.

Sewell says the likes of AI and the IoT may well be areas that CLA could use in the future but for now he is focused on ensuring the company will be fully compliant with the EU General Data Protection Regulations (GDPR).

"With the GDPR regulations coming in April 2018 there are big implications of how companies use data and CLA is focused on this," he says, adding that new technologies have to be fit in with the new legislation and vice versa.

But making sure CLA is fully compliant isn't just something that needs to be looked at from an IT perspective, Sewell emphasises.

"People across the business have to understand the implications of it what they can and can't do. It's going to be very different to today because of the huge fines if you breach legislation," he states.

He adds that a recent story which said that more than half of UK businesses were not prepared for GDPR didn't surprise him.

"There are implications across so many different systems about how organisations capture and use data; if organisations are not looking at this today, they will struggle to be prepared by April next year," he says.