Our writer explores what the re-vamped lounge has to offer the business travel... and is mightily impressed 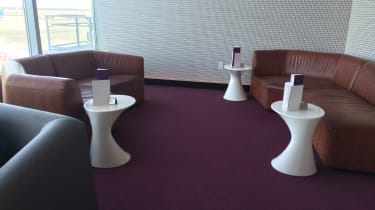 Lounges seem like a nirvana at the best of times. But, at the worst of times (when you've already travelled for several hours from one state to another and then been so tired you're only option for a 12-hour layover is to find the nearest hotel and pay a full room rate for just a few hours of much-needed sleep), they are the nearest your life will get to perfection.

That was me towards the end of February. I'd just travelled back from Las Vegas via New York and was dead on my feet. However, the lovely people over at Virgin Atlantic in the US let explore the clubhouse at JFK airport so that I could report back as part of our business travel coverage.

Access to Virgin Atlantic's clubhouses around the world are strictly by invitation only. You need to be either flying Upper Class or be a Flying Club Gold card holder in order to gain access. In some circumstances, it is possible to get lounge access via Virgin Holidays, but this comes with a fee.

Many travellers stand like a child outside a sweet shop with their faces pressed against the window to sneak a peak of the marvelous world of luxury that lies within. OK, so that's not strictly true, but it gives you an idea of how coveted Clubhouse access is.

Back to the Clubhouse at JFK. Due to the departure times of Virgin Atlantic's flights out of the airport it's closed between when the last morning flight leaves at around 8am and mid afternoon. I arrived around 2pm and was one of the first few people to enter.

The reception/entrance area to the lounge is impressive without being overwhelming and you're greeted with a smile and asked whether you'd like a tour or whether you've visited before. You also pass a really striking nod to your location in the form of a large silver Apple.

Once in the lounge you have a great view of the main areas. To the right there are sofas and chairs aplenty. If you follow them round to the right, there's dedicated (and spacious) restaurant area with formal seating.

You've then got the toilets to the right. Toilets don't get much attention in reviews, but I feel it important to highlight two cute touches Virgin has added here. Firstly, the curved walkway to the loos is lit up like a runway and, secondly, the his and her's signs are the Statue of Liberty in miniature.

Follow the path from the toilets around and you're greeted with the spa area (a first for overseas Clubhouses) where you can book in for treatments to make you feel even more pampered. The first treatment is free (from a select list) while paid-for services are also on offer.

Then you come to a large window that looks out onto the departure gates and planes below. This has an array of soft chairs and footstools, with little tables so you can both work or rest or both as is your wish. Towards the end of that side of the lounge there are several booths, in addition to a workbench with high stools and several iMacs.

The bar area, with additional seating acts as the hub of the lounge, with everything else places around it in an easily accessible way. There's also a pool table if you fancy a bit of sporting action while waiting to depart.

I found myself a little spot near the departure gate window, next to the spa, so I could indulge my inner plane geek and have a nose at general airport operations, such as luggage movement and food loading, going on below me. The lounge is just above the Virgin Atlantic dedicated departure gates so you're very likely to get a glimpse at your particular vessel prior to boarding.

More than one friendly face

Staff are incredibly attentive and friendly and, once you've found your spot, quickly come over and introduce themselves. Maureen, whose smile was infectious as she asked if I'd like a drink, greeted me. The choice is plentiful, but I went with the signature Virgin Redhead cocktail.

The food menu is akin to a restaurant with enough choice to please even the fussiest of eaters.

I went for the French Onion soup. The presentation was excellent and the taste was sublime. The portion size was just right for a rich dish, but I could have easily eaten several more portions it was that delicious.

After a break and a spot of work, I opted for a main course from the menu. I went for the curry, which was served tiffin style with poppadoms and coconut rice.

Again, presentation was spot on and the dish had the right mix of spice and flavor. It was ideal for my palate. My only complaint would be the portion size was a bit on the small side, but given I'd already had a starter and planned on squeezing in a desert too, that's perhaps for the best. Given the pre-flight nature of airline lounges, this could be a deliberate strategy to ensure passengers don't board a long-haul flight feeling too full up or bloated after a big meal.

It was time for some champagne. Maureen continued to call me sweetie and was incredibly attentive, regularly topping up my glass and checking everything was OK.

I then tried the chocolate fondant for desert. It came with cream and almonds on top. I was asked if I wanted side of vanilla ice cream too, so I duly accepted.

The pud was very, very nice, but incredibly rich and as I'd already eaten quite a bit, I wasn't able to finish the lot.

From 4.30pm/5pm onwards the clubhouse started to fill up. But it still didn't feel as maxed out as LHR, for example.

Just prior to leaving the lounge to board the plane, I took the opportunity to have some tea. Presentation didn't disappoint.

The background music piped through the lounge was neither too loud nor too quiet. I could hear the man near me snoring at one point, but that is par for the course when at an airport! The music selection was also well rounded with some retro Blur and 80s, mixed with Coldplay and modern songs from film soundtracks.

The lounge opened in March 2012 and, when announcing its imminent opening in the February of that year, Virgin said: "The new space will have an atmosphere of a private members club, a boutique hotel lobby, a restaurant service and a chic bar (plus a few surprises!)." I think that vision has been realised.

All in all, the Virgin Atlantic Clubhouse at JFK manages to strike the perfect balance between trying too hard to be hip and cool and providing everything the time-pressed, work-overloaded business traveller requires. It's definitely work checking out as and when you can.