The new division will be headed up by AOL's Tim Armstrong 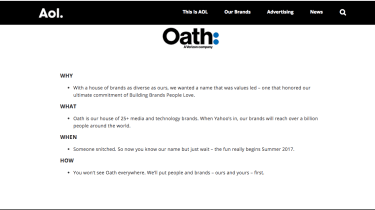 The Yahoo media brand is not changing under Verizon, but will be grouped with other brands in the new media division.

AOL CEO Tim Armstrong confirmed the name through a tweet late on Monday night. He said the two companies would combine to have more than 20 brands and more than a billion consumers, as well as hinting that the launch would be this summer. A Twitter account for Oath has also been created.

Verizon acquired AOL for $4.4 billion in 2015 and owns sites such as Engadget, The Huffington Post and TechCrunch, and will soon own Yahoo's Tumblr and Flickr businesses.

The division will be formed once Verizon closes the $4.83 billion (3.89 billion) acquisition of Yahoo. The deal has been lowered by $350 million after two cyber attacks came to light where 1 billion customer accounts were compromised in 2013 and another 500 million in 2014.

Yahoo CEO Marissa Mayer will not be continuing with the new company, which will instead be led by Armstrong. Mayer will not receive her full payout following the hacks but should still receive $23 million, losing $9 million.

The parts of Yahoo that Verizon are not buying, including its 15% share in Chinese retail giant Alibaba, and 35.5% share of Yahoo Japan, will continue under the rebranded name Altaba.

Verizon is seen to be trying to take on Google's parent company, Alphabet, and other rivals with this new conglomerate by grouping its digital content services under one umbrella.