The snapshot of 8,000 salaries is a fraction of the Department of Labor's original request

Google must hand over its salary information to the US Department of Labor (DoL) to aid its ongoing investigation into whether the tech giant is paying female staff a fair wage, a judge orderedon Friday.

The firm must hand over a snapshot of salary data for 8,000 staff in 2014. Additionally, it must also provide contact information for these employees, with whom the DoL can potentially conduct interviews.

Judge Steve Berlin partly sided with Google, though, saying that it does not have to hand over all the data requested - the DoL had asked for wage information for 25,000 employees dating back 15 years. Berlin said that this request was "over-broad, intrusive on employee privacy, unduly burdensome, and insufficiently focused on obtaining the relevant information".

Google's VP of people operations, Eileen Naughton,said in a blog postthat she was pleased with the decision and, assuming the decision is final, that Google will "comply with the remainder of the order, and provide the much more limited data set of information the judge approved, including the contact information for a smaller sample of up to 8,000 employees".

Google has denied claims of gender pay discrimination made by the DoL, who said the company underpays its female workers. As Google is a contractor for the federal government, it can be compelled to hand over records of employee information, salary history and other data in accordance with compliance laws.

Despite this, the DoL claimed that Google had constantly failed to release the data, which forced the department to issue a lawsuit against the company in January 2017. Google claimed to be "surprised" after US allegations that a pay gap existed at the company.

The search giant stated in May that it was too hard and expensive to get together the information needed to prove it's addressing the gender pay gap. The tech company said it would take 500 hours and $100,000 to compile, though the DoL said Google could easily absorb this cost.

Silicon Valley has been a hotbed for allegations of discrimination and sexism recently, with companies like Uber and Oracle making headlines. The CEO and co-founder of 500 Startups quit at the beginning of July, following accusations that he made sexual advances towards many of the women involved in the startup scene. Uber's CEO, Travis Kalanick, also resigned in June afteracting late to address claims of systemic sexism and harassment in the workplace.

Google thinks it's too hard and too expensive to get together the information it needs to prove it's addressing the gender pay gap, according to the Guardian,following accusations by the US Department of Labor (DoL) that it's underpaying women.

Google has told US courts it won't be providing the pay records of its employees, saying it would take 500 hours and $100,000 to compile.

"This is obviously a very time-consuming and burdensome project," Lisa Barnett Sween, one of Google's attorneys, told the court. She added the company had already spent 2,300 hours, which has cost the company nearly $500,000 (390,000) to collate some of the records and partially comply with the requests.

However, the DoL's attorney, Ian Eliasoph, viewed this as a weak excuse as to why the tech giant wouldn't be able to come up with the documents.

"Google would be able to absorb the cost as easy as a dry kitchen sponge could absorb a single drop of water," he said, as quoted by the Guardian. He also brushed off Google's claims that providing the information was irrelevant to the government's audits of the company's working practices. "This claim requires putting one's head in the sand with respect to 30 years of law on pay discrimination," he said.

However, Barnett Sween countered that even asking for such information was unfair and should be under investigation by higher authorities. The company has apparently bowed down to the DoL's requests so far and having to bring on a third party to carry out the audit was unnecessary and too costly.

"Our courts must act to check this abuse of power," she added, suggesting Google thought it was unlawful of the government department to ask for it to provide such information.

Google has tried to dismiss court proceedings into the tech giant's gender pay gap and attempted to restrict reporting on the case,according tothe Guardian.

The publication revealed details of the investigation following an interview with the US Department of Labor last month. It now reports that Google believes that interview violated ethics laws, and filed a motion for dismissal. According to the newspaper, the judge rejected that motion on the grounds of free speech. Google also reportedly tried to ban press from a hearing, but was unsuccessful at keeping reporters out.

Google's alleged complaint stems from Department of Labor solicitor Janet Herold telling the newspaper that it has "compelling evidence" of "significant discrimination" at Google, while the case is still ongoing, suggesting the department had already made up its mind about the pay issue and was no longer actually investigating.Attorneys are not supposed to make public statements that could "materially prejudice" proceedings.

The case hinges on an audit of Google's gender pay gap. The company has handed "hundreds of thousands" of files to the Department of Labor regarding its compensation of female employees, but the government claims it didn't provide the right details, including salary history and contact details.

Google hasn't yet replied to IT Pro'srequest for comment, but has previously disagreed with the salary differential claims, saying its own audits have shown no gender pay gap remains at the company.

Google released a statement today claiming surprise after US government allegations that a pay gap exists at the company.

The US Department of Labor claimed yesterday that Google systematically discriminates against female staff, during a court case demanding Google gives up salary data for its employees.

Eileen Naughton, VP of people operations at Google, responded to say the company has supplied "hundreds of thousands" of documents to the department, and that the accusations are baseless.

"We were quite surprised when a representative of the Office of Federal Contract Compliance Programs at the U.S. Department of Labor accused us of not compensating women fairly," she said. "We were taken aback by this assertion, which came without any supporting data or methodology. The OFCCP representative claimed to have reached this conclusion even as the OFCCP is seeking thousands of employee records, including contact details of our employees, in addition to the hundreds of thousands of documents we've already produced in response to 18 different document requests."

Naughton said Google had shared its "top-level analysis" about the gender pay gap in 2016. She claimed that the annual analysis "is extremely scientific and robust" and that the methodology is available to other businesses. 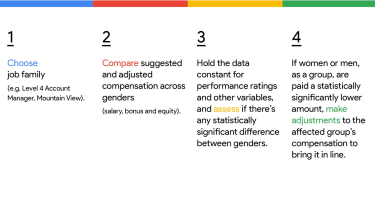 Each year Google suggests an amount for every employee's new compensation based on "role, job level, job location as well as current and recent performance ratings" and the analysts who calculate the suggested amount "do not have access to employees' gender data".

Naughton explained: "Our pay equity model then looks at employees in the same job categories, and analyzes their compensation to confirm that the adjusted amount shows no statistically significant differences between men's and women's compensation."

Naughton said that "our analysis gives us confidence that there is no gender pay gap at Google" and she added that Google hopes to work with the OFCCP to resolve the issue.

Google systematically discriminates against female staff, according to the US Department of Labor (DoL).

The department said it has found that the company underpays its female workers, according to a Guardian report, in violation of federal laws. Google denies the claims.

"The investigation is not complete," regional solicitor for the DoL Janet Herold told the Guardian,"but at this point the department has received compelling evidence of very significant discrimination against women in the most common positions at Google headquarters."

"The government's analysis at this point indicates that discrimination against women in Google is quite extreme, even in this industry," she added.

Regional director Janette Wipper testified in a San Francisco court last Friday that the department had discovered "systemic compensation disparities against women pretty much across the entire workforce", according to the Guardian.

Wipper claimed that a snapshot of salaries from 2015 showed evidence of disparities and that the government needed access to further payroll data, as well as confidential employee interviews, in order to successfully pinpoint the cause of the issue.

"We vehemently disagree with Ms. Wipper's claim," a Google spokesperson told IT Pro. "Every year, we do a comprehensive and robust analysis of pay across genders and we have found no gender pay gap. Other than making an unfounded statement which we heard for the first time in court, the DoL hasn't provided any data, or shared its methodology."

Google supplies services to the federal government as a contractor, meaning that it can be compelled by the government to hand over records of employee information, salary history and other data in accordance with compliance laws.

However, the DoL claims that Google has consistently failed to release the data, forcing the department to issue a lawsuit against the company in January. A company spokesperson told Reuters that the requests were "overbroad in scope, or reveal confidential data".

Google could face some serious consequences if the suit does not go its way; the DoL has asked the court to cancel all the company's existing federal contracts and bar it from future government business if it does not comply with the department's requests.

These accusations are the latest reference to Silicon Valley's systemic discrimination problem. Tech companies like Uber have found themselves in hot water in recent months over allegations that they are allowing sexist behaviour to run rampant throughout their organisations.