Education looks set to be focus of Microsoft May event 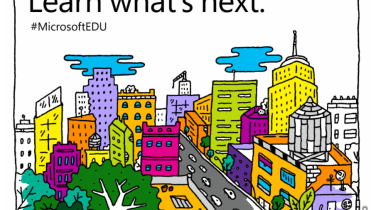 Microsoft has sent out invites to the press for an event to be held next month.

Titled "Learn What's Next", the event will take place in New York on 2 May, just eight days befor the company kicks off its Build 2017 developer conference. The event begins at 9.30am ET (2.30pm BST).

The only clue to what the event is about is a hashtag, #MicrosoftEDU, which points to the event being focused around education. The image is also of a city skyline. Some in the media have speculated that the event may also be about the launch of Windows 10 Cloud.

It has been reported that the codename for the event is Bespin, which is the famous cloud city that appeared in 'Star Wars: The Empire Strikes Back'.

Windows 10 Cloud may be Microsoft's answer to Google's cheap, cheerful and somewhat popular Chrome OS, which powers the Chromebooks that have been selling well in educational establishments and institutions. In the same way that Chrome OS runs Google apps, Windows 10 Cloud is a version of the Windows 10 operating system that runs apps only from Microsoft's Windows Store.

In January, Microsoft went into detail about Intune for Education, its a cloud-based management tool aimed at allowing IT departments in schools and colleges to configure and control many devices at once.

There are also rumours that a slightly upgraded version of the Surface Pro 4 will be unveiled. However, there has been no news of a launch of the Surface Book 2 or even a Surface Phone. The launch of those two devices seems unlikely, according to ZDNet's keen Microsoft watcher Mary Jo Foley.

It also seems unlikely that Microsoft will show off any more detail on its Xbox Project Scorpio, its next-generation successor to the Xbox One, at an event dedicated to education.