126 million US citizens 'may have seen Russian Facebook posts' 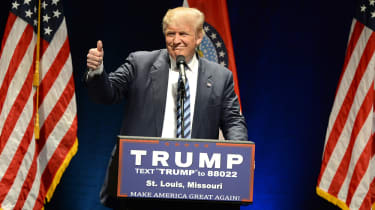 Around 126 million US users may have seen Russian-backed Facebook posts over the past two years, as America prepared for the 2016 presidential election.

The social network said around 80,000 Russian posts were published between June 2015 and August 2017, around the 2016 election, and most of them focused on divisive and political messages, according to Reuters, which has seen Facebook's written testimony for a Senate hearing due to take place later this week.

The social media giant will be joined by Twitter and Google at the hearing to present their findings of Russia's impact on their services.

Colin Stretch, Facebook's general counsel, reportedly wrote in the testimony: "These actions run counter to Facebook's mission of building community and everything we stand for. And we are determined to do everything we can to address this new threat."

Stretch also said that the 80,000 posts from Russia's Internet Research Agency were a tiny fraction of content on Facebook and equal to one out of 23,000 posts.

Additionally, a source familiar with Twitter's written testimony also told the publication that it had found 2,752 accounts linked to Russia operatives. This is up from the initial 201 accounts announced in September.

The source added that Twitter has suspended the accounts in question, which were tracked to Russia's Internet Research Agency and given US congressional investigators the account names.

In its written testimony, Twitter said: "State-sanctioned manipulation of elections by sophisticated foreign actors is a new challenge for us - and one that we are determined to meet."

Kent Walker, SVP and general counsel at Google, also announced that the company found two accounts linked to the Internet Research Agency, which spent a total of $4,700 on the tech giant's platforms during the 2016 election cycle.

Google said the figure was for both search and display ads and the posts were not targeted for specific groups of users. There was no evidence of targeting users depending on their location or their inferred political preferences.

On YouTube, Google found 18 channels associated with the campaign, which made videos displayed in English that appeared to be political. More than 1,000 videos existed in the channels, representing 43 hours of content and totaling 309,000 US views from June 2015 to November 2016.

Lastly, Google found that the Russian-linked campaign had used Gmail accounts to open accounts on other platforms, which it has shared with the platforms in question.

Around 136 million US citizens voted in the November 2016 US presidential election, about 55% of the country's population. The news comes as aides associated with President Trump's election campaign team were indicted this week amid an investigation into Russia's impact on the election.

Google believes it has discovered evidence that Russian agents bought hundreds of thousands of dollars worth of adverts that appeared on YouTube, Gmail and Google search, in an effort to meddle in the 2016 US presidential election.

The news expands the scope of current investigations into alleged state-sponsored adverts on social media platforms, which appear to have sought to spread misinformation to millions of Americans as they considered who to vote for.

Facebook was the first social media site to admit that its automated advertising platform had allowed over $100,000 worth of Russian-backed ads to appear on its platform, forcing the company to introduce a raft of changes that introduced greater human oversight. As a result, the social network has faced fierce backlash over its use of algorithms, something Google has so far avoided experiencing.

Microsoft announced yesterday that it would be also investigating the possibility that Russian agents purchased adverts to be displayed on its Bing browser searches, although the company gave no further details.

Google discovered accounts thought to have been Russian-backed had bought just under $100,000 worth of adverts across its various platforms, including $4,700 worth of search and traditional display adverts, according to a source speaking to Reuters.

Statistics published by market analysts comScoreshowGoogle's Chrome browser accounts for 63% of all internet searches in the US, and therefore the number of people exposed to the adverts could potentially be much higher than those on Facebook.

A further $53,000 worth of political adverts were also purchased by agents using Russian websites or physical addresses, according to Reuters's source. However the source, who is prohibited from speaking publicly, said that it's unclear whether the agents were acting on behalf of the Russian government, meaning the adverts may have been purchased by citizens instead.

Unusually, the adverts appear to have crossed political parties and both supported and disparaged the US presidential candidates. The Financial Times reports that over $7,000 was spent promoting a film about Donald Trump's controversial efforts to build a golf course in Scotland, while $36,000 was spent on adverts criticising Barack Obama and calling for his resignation.

Facebook's chief security officer, and the man responsible for investigating Russia's political interference on the platform, has slammed journalists' reports that its fake news-spotting algorithm was misguided.

Alex Stamos's Twitter tirade over the weekend attacked what he called reports "driven by stereotypes of our employees and attacks against fantasy, strawman tech cos".

Despite recent claims that companies such as Facebook hold a belief that algorithms are neutral, Stamos said employees understand that they aren't and are aware of the risks associated with developing potentially exploitable machine learning tools.

"Nobody of substance at the big companies thinks of algorithms as neutral. Nobody is not aware of the risks," said Stamos. "In fact, an understanding of the risks of machine learning (ML) drives small-c conservatism in solving some issues."

"Lots of journalists have celebrated academics who have made wild claims of how easy it is to spot fake news and propaganda... without considering the downside of training ML systems to classify something as fake based upon ideologically biased training data."

He claimed that journalists aren't seeking out the experts that have had to solve these types of problems with real life consequences.

His comments come as Facebook begin to roll out changes in response to Russian interference during the US presidential election, in which it was found that Moscow-backed advertisements had been seen by an estimated 10 million users.

Those changes include making the purchasing of advertising more transparent, and an expansion to the team currently monitoring security and "election integrity".

However, many have questioned Facebook's approach to the use of algorithms, and that the company's new affirmative policies announced by CEO Mark Zuckerberg last last month should have been implemented a long time ago.

Washington Post contributor Quinta Jurecic, whose comments sparked the Twitter rant, argued that Facebook's shift back towards human oversight is a sign that the algorithms aren't working.

algorithms are not neutral, they are designed. could you design an algorithm to review these ads more quickly than humans? maybe!

"Saying 'the algorithm is bad now, we're going to have people do this' just entrenches 'The Algorithm' as a mythic entity beyond understanding... rather than something that was designed poorly and irresponsibly and which could have been designed better," argues Jurecic.

Facebook has already handed more than 3,000 ads to Congress though to have been purchased by Russian-backed actors, and has added 1,000 employees to its review team.