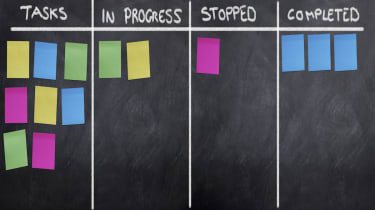 British businesses waste an estimated 37 billion a year on agile projects that don't achieve their objectives, a report by IT consultancy 6point6 has found.

The company questioned 300 CIOs about how they're using agile project management methodologies and their successes and failures.

Although the majority (95%) of CIOs have worked in a scaled agile environment with multiple teams working on multiple projects at the same time, there are significant failures that mean the projects don't have the expected outcomes.

Longevity of support was also a problem highlighted by CIOs. Some 44% of respondents said projects failed because not enough (or in some cases, none at all) documentation was produced to offer ongoing service support of the software created in the project.

"Agile IT in the UK is facing a hidden crisis - 12% of agile projects are failing completely," said Chris Porter, CTO and co-founder of digital delivery specialist 6point6.

"CIOs tell us they expect to undertake six agile projects next year, one in eight of which will fail completely. Given there are about 6,000 CIOs in the UK and that the average agile IT projects costs approximately 8 million, that represents a huge amount of waste. The truth is that, despite the hype, agile development doesn't always work in practice."

The report also revealed that more than half of CIOs think the agile methodology is now discredited, while three quarters aren't prepared to defend it as a way of completing projects anymore. Additionally, half of CIOS think agile processes are just an IT fad rather than a beneficial way of ensuring a project runs smoothly and meets business objectives.

Staffing was also a problem in agile environments. More than two third (68%) of CIOs think their teams need more architects to produce better results. However, the average in-firm career expectancy of a CIO is only 14 months, which isn't long enough to make a significant contribution to the change required. 6point6 concluded that CEOs must take responsibility to ensure projects succeed, even if the CIO role changes hands.