Facebook is reportedly aiming to present itself as a political tool by hiring former senior Conservative and Labour campaign officials.

A report by the Guardian claimed these new recruits have inside knowledge of how the major parties' general election campaigns are likely to work, meaning Facebook will be able to tailor its services for them.

The staff include a former Downing Street adviser to David Cameron, a former aide to Ed Balls and a social media expert who worked with the Conservatives' election strategist Lynton Crosby, according to the publication.

The social network told the newspaper it employs staff "whose role it is to help politicians and governments make good use of Facebook". IT Pro has approached the firm for comment.

Using LinkedIn, the Guardian appeared to identify the Facebook policy team formerly on the frontline of British politics. Rishi Saha is head of Facebook's public policy and was previously deputy director of digital communications at Downing Street. Karim Palant is the firm's UK public policy manager and was previously a former chief policy advisor to Ed Balls. Lastly, Theo Lomas, who works as in politics and government outreach for Facebook, was previously a former political consultant for former Tory campaign director Lynton Crosby.

"Their job is to persuade political campaigns to use Facebook," an anonymous source told the Guardian.

The report also alleged that both Labour and the Conservatives are preparing to hand over a large sum of money to Facebook in the next few weeks for political advertising. Facebook attracted $26.9 billion in advertising in 2016 and now by offering their platform to political parties they will seek to raise that figure and compete with Google, which attracted three times the amount.

Facebook has an "Elections" website where campaigners can use its tools to engage with potential voters, allowing users to build email lists or even get voters to the polls. 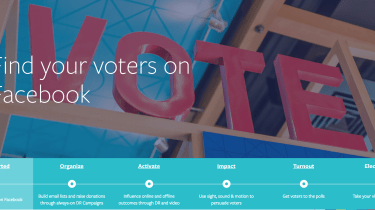 The news comes amid claims that people's personal data is being wrongly mined for use in political campaigns. The Information Commissioner's Office (ICO) started an investigation last March into the potential role of Cambridge Analytica's use of personal data in the Leave.EU referendum campaign.

The ICO is also conducting a wider assessment of the data protection risks arising from the use of data analytics and will publish its findings later this year.

Some citizens are fighting back against this kind of data targeting, with the recent launch of a non-partisan project that allows users to track which political campaigns are targeting them through social media. Users download a Google Chrome extension which then sends the data to the project to collate and analyse in order to find out exactly who these political campaigns are focusing on.