Brexit uncertainty has reduced the amount of foreign tech workers looking for jobs in the UK, with companies based here looking less to hire them, too.

Job search marketplace Hired has released a report today which details its findings about the attitudes of foreign workers towards the UK coming out of the EU. The company took the data from its marketplace, where it has over 20,000 candidates and 850 clients in the UK. It monitored how active foreign candidates were on the platform and how clients interacted with them. It also conducted a survey of over 200 UK based candidates.

Hired found that the number of foreign candidates in the pool was less than half than what it was pre-Brexit. UK employers are also less confident in recruiting from abroad since the Brexit vote.

UK companies sending offers to candidates fell from 25% at the beginning of 2016 to just 18% a year later. The representation of foreign candidates in their total talent pool also decreased by 60% since Brexit. 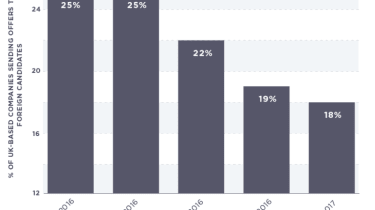 Hired surveyed its UK based candidates and found that 71% said that the UK's exit from the EU tech sector would damage the tech industry. UK workers listed Brexit as their biggest concern, followed by happiness at work, personal development and salary.

77% of the workers said there would still be uncertainty a year from now and 31% anticipate it being harder to find a job in the next 12 months. 70% of the people Hired surveyed have considered leaving Britain in the wake of Brexit and they plan to move to other European cities, although North America, and Australia were also popular relocation destinations.

In addition to this, 41% of all tech workers told Hired they are less likely to start their own business in the UK as a result of Brexit.

Mehul Patel, CEO of Hired, said the company expected foreign workers to be less active on the platform as they don't know their immigration status here so they won't take a new job or move.

"What was also interesting is that we saw a 30% drop in companies asking foreign candidates to interview. Both sides, both candidates and companies, are sort of standing still right now, while there is uncertainty over what Brexit will mean" he said.

Patel highlighted that companies could look at workers from outside the EU through the tier 2 skilled worker programme and look at more home grown talent. He suggested to broaden the base of schools companies look at when hiring and look for people with the right skills but without a computer science degree, as you can test them to make sure they are capable.

He said that it was staggering so many of those asked said they are less likely to start a company here. "If those development jobs are now in Europe you can imagine that UK workers are going to try and get language skills to take advantage of jobs in Europe. The concern here is whether there will be a brain drain," he said. 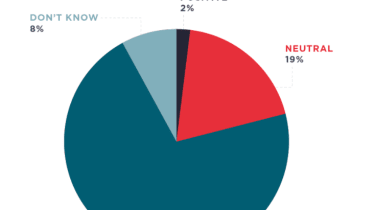 Patel underlined that once the new rules are in place people will feel more confident in immigrating here and the pessimism will go away. He added: "I think innovation is driven by talent and you have to be a talent magnet. PM May has talked about the UK being a global talent magnet, mayor Khan is talking about London being a talent magnet and so I think people want that to happen, the next question is just when it happens."

Patel also pointed to the stormclouds on the horizon and underlined that there is a sense of urgency in getting the new immigration rules in place.

"The tech economy in London is doing amazingly well, but if the problems around getting the best talent to the UK isn't solved then long term it could impact how quickly this market grows," he said.