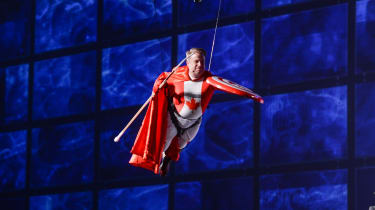 The final keynote of Dell EMC World 2017 was rounded out in usual fashion, when converged platforms and solutions president Chad Sakac flew in dressed as 'Captain Canada'.

Continuing the theme of superheroics of the morning's keynote which featured a tongue-in-cheek video series about 'the Dark IT Knight' Sakac surprised attendees when he was flown in on a wire rig suspended from the ceiling, in full costume.

Sakac was there to demonstrate and discuss Dell's converged infrastructure solutions, following similar presentations from the heads of the company's server, storage and data protection arms. Each business unit had major product updates to show off, with live on-stage demos to illustrate their capabilities.

The overarching theme of the keynote (aside from superheroes) was Dell's alleged total dominance of the data centre market. The company said it now supplies all the major hardware and infrastructure needed for a company's data centre operations. It had impressive stats to back it up, too; the company is now number one in terms of server sales, shipping four servers every minute.

The keynote capped off an assured and confident event, which has played host to an almost total product refresh in its data centre division, and acts as a strong first outing for the new future of the Dell EMC's annual event.