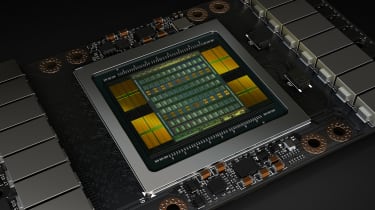 In an effort to compete against companies developing processing units optimised for use with AI, Nvidia has unveiled a new range of GPUs built on its next-generation architecture, known as Volta.

Nvidia, well regarded in the gaming industry for its market leading graphical processers, has been overshadowed in the AI field by the likes of Google and its Tensor Processing Unit (TPU), which offers specialised chips for powering AI applications.

The chip boasts more than 21 billion transistors and 5,120 cores, although importantly for AI, it also features 640 Tensor Cores. These cores are designed to run the complex mathematical processes that power deep learning and neural networks, which are able to produce 120 teraflops of performance, according to Nvidia.

This translates to a processing unit that is five times as powerful as Pascal, Nvidia's current graphical architecture. The Tesla V100 is capable of speeding up the deep learning processing by as much as 12 times and a single unit is the equivalent of 100 CPUs provided by the likes of Intel, the company said.

Nvidia still faces the problem that its GPU units, by their very nature, are built to power graphics, which requires considerably more computing power and demand on the chip. This means that more specialised processing units will always be more efficient than GPUs - Google recently claimed its TPU chips were up to 30 times faster than modern GPUs and CPUs for deep learning inferences, and up to 80 times more power efficient.

However Nvidia could be on a winning streak with its GPUs, as demand from companies wanting to leverage Nvidia technology in datacentres has produced a 50% surge in revenue over the last quarter.

Nvidia also recently revealed that its Drive PX AI platform is to be integrated into Toyota's latest fleet of self-driving cars, which will be manufactured over the next few years. This is the latest in a string of deals with self-driving carmakers, with Nvidia having already partnered with Audi and Mercedes on their own autonomous vehicle range.