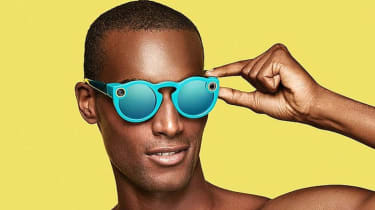 Snap's Spectacles seemed a sensation when they launched last year, but a report suggests the company has hundreds of thousands of the camera-loaded smart glasses sitting unsold in a warehouse.

That's according to a report from The Information, which cited a pair of sources close to the company, and follows and contradicts CEO Evan Spiegel saying earlier this month that Snap had sold 150,000 Spectacles.

Spectacles are the first hardware from Snap, the company behind the Snapchat messaging app, and initially sold for $130 via vending machines, with the limited supply leading some keen Snapchat fans to snap them up on eBay for as much as $1,000. They're now available more widely, landing in the UK earlier this year for 130.

The wider availability doesn't appear to have helped shift more Spectacles, with sales slipping to 41,500 in the second quarter, according to Business Insider estimates, down from 64,000 in the first quarter.  Those that have shipped may have been sold at a loss: another report claimed the hardware company that Snap bought before releasing Spectacles sold its version of smart glasses for more than $300.

The struggle to sell Spectacles led to layoffs in the hardware division at Snap last month, with more set to follow, reports said last week.

Snap joins fellow tech firms making hardware missteps: Facebook and Amazon both tripped up releasing phones, while Google pulled its own smart glasses from sales, before rereleasing them as a business product.

Reports suggest Snap has a second line of Spectacles in the works that make use of the company's augmented reality technology, a version of which is already in use in the Snapchat app.

Snap announced in January it was planning to extend its London office despite the challenges Brexit is raising for the local tech economy.

Snap shares fell below their initial IPO price for the first time yesterday, dipping below the $17 share price.

According to the Financial Times, Snap has traded lower as investors are worried about new shares entering the market at the end of July, when restrictions on insiders selling stock are lifted. There will be an additional one billion shares available, although not all are expected to be traded. However, considering only 180 million were sold in Snap's initial IPO, it may dilute the stock.

In its initial public offering back in March, Snap raised $3.4 billion, which propelled the company to a $24 billion valuation. It was the most valuable US tech IPO since Facebook floated its stock in 2012, but certain areas of the market were skeptical about the messaging app's potential for monetisation.

In May, Snap share value dropped by 20% after it reported slow growth in its first quarter, posting an adjusted loss of $188.2 million. Revenue was at $150 million, but net losses hit $2.2 billion.

Snapchat has faced intense competition from companies such as Facebook, WhatsApp and Instagram. These companies have launched Snapchat-esque features, which allow users to take a photo and send it to someone, or display it at the top of the app as a "story".

Commentators in the industry have compared the photo-messaging app to the ailing fortunes of Twitter, which has failed to deliver on investor expectations despite a huge IPO and a thriving user base.

Back in June, other tech companies such as Google, Microsoft and Facebook experienced losses in their share prices as the whole market took a tumble. US tech stocks fell by 4%, losing a total of $140 billion.

A study at the start of 2017 showed that a third of tech companies that have gone public in the last decade are now trading beneath their initial valuation. Analytics firm Geckoboard conducted the study and its findings suggested that Snap would not retain its value for long.

Shares in Snap have sunk after it reported slow growth in its first quarter.

There was a 5% increase of users from 158 million in the previous quarter to 166 million in this quarter. This is two million less than expected but a 36% increase year on year. Shares dropped by just over 20% following the news.

Snap experienced an adjusted loss of $188.2 million, which was around $10 million higher than analysts expected it to be. Net loss rose from $104.6 million to $2.2 billion, which is thought to have been because of costs associated with the March IPO. Revenue was at $150 million, which was a 286% rise, but still short of the forecast by $9 million.

The BBC reported that in a conference call Evan Spiegel, co-founder and chief executive, said: "We still have a lot of work to do, but we are excited by the amount of progress we have made in such a short time."

When asked if he feared Snap would be crushed by Facebook, Spiegel replied: "You have to get comfortable with the fact that people are going to copy you if you make great stuff. Just because Yahoo has a search box, it doesn't mean they're Google."

Snap IPOed in March, which raised $3.4 billion and propelled the company to a $24 billion valuation. It was the most valuable US tech IPO since Facebook first floated its stock in 2012.

Despite this, certain areas of the market were skeptical about the ephemeral messaging app's potential for monetisation. Even though revenue had increased by nearly 700% the previous year, the company's net losses also increased to the tune of over $500 million.

Snapchat has faced stiff competition from companies such as Facebook, WhatsApp and Instagram. These companies launched Snapchat-esque features which allow users to take a photo and send it to someone, or display it at the top of the app as a "story".

Commentators have compared the photo-taking app to the ailing fortunes of Twitter which has failed to deliver on investor expectations despite a huge IPO and a thriving user base.