We explain the principles and benefits of microservices 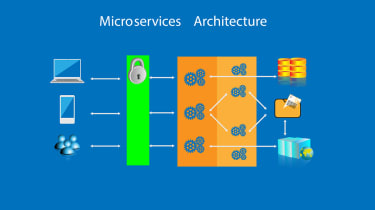 Microservices, also known as microservice architecture, are a method of developing software systems that has significantly grown in popularity in recent years. It's a difficult method to define but has become a preferred way of working for many developers in order to create bespoke applications for businesses.

But while there are no standard definitions of microservices, it's easy to identify some of the key characteristics that define their style and typical practices. Microservice architecture is a method of developing software applications as a suite of independently deployable services, each of which utilises a unique process, and communicates through a well-defined mechanism to serve business goals. Microservices also allow organisations to evolve their technology stack in an efficient and effective way.

The theory behind microservices is that some types of applications are easier to build and maintain when they are broken down into smaller chunks that work together in unison.

Each component is developed separately, and the overall application is the sum of all the parts working together. This comes in stark contrast to traditional methods where applications are typically developed wholly together. Some of the biggest websites on the internet have evolved from monolithic to microservice architecture, including Netflix, eBay, Amazon, Twitter, PayPal and the Guardian.

The philosophy of microservice architecture is aligned with the Unix philosophy of 'do one thing and do it well' - services are small and finely tuned to perform a single function, with a focus on automation of testing and deployment. Developers using microservice architecture should always embrace failure and faults and they should ensure each element is resilient, composable, minimal and complete.

What are the benefits of microservices?

Although microservices aren't an answer all' architecture, there are a great many benefits to using them as a development tool, including reduction of application build time, quality assurance time and effort. As they can be developed by a smaller team, this can result in financial savings for a company too.

Code can also be be written in different languages, meaning outsourcing or working with a range of people with different skillsets can be a possibility.

Microservices also allow for more efficient scaling. Rather than scaling upwards with bigger and more powerful, expensive machines, businesses can scale outwards with duplicate copies of the heaviest-used parts. And as code is organised around business capabilities, microservices are extremely streamlined for the business they are built for.

Why are microservices easier to develop?

There are many reasons why microservices are easier to develop. Many are of the belief that it's a better method of developing large applications and other types of software-as-a-service delivered over the web.

For example, from a project engineering perspective, when different components of an application are separated, they can be developed concurrently. Rather than relying upon one single virtual or physical machine, components can be spread across multiple servers or data centres. This increases the program's resilience without compromising the integrity of the application. For example, if one component dies, the rest of the application can continue to work as normal whilst the dead component is fixed.

Microservice architecture, in essence, uses services to componentise. It's organised to fit around business capabilities and its focus is on product, not projects with smart endpoints. It's also designed to accommodate service interruptions whilst retaining usability across other components.

What role does open source play in microservices?

When an application is designed and built from the ground up to be modular and composable, it allows you to to use drop-in components. These may replace areas in the past where you may have had to use proprietary solutions, either down to the licensing restrictions of the components or specific requirements. Many components of an application can be off-the-peg open source tools.

Developers also have the opportunity to offer alternative interfaces for your applications. When everything is an API, communication between application components becomes completely standardised.

Microservices offer serious benefits for designing and implementing a company's applications. Many developers are utilising approaches which are classed or could be classed as microservices, meaning that it's a form of development which is on the rise.