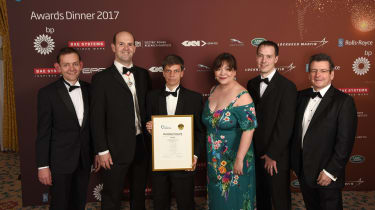 The Raspberry Pi has won one of the country's top awards for engineering, given to innovations that have significant societal benefits as well as commercial applications.

The MacRobert Award, which has been running since 1969, is presented by the Royal Academy of Engineering. Winners receive a gold medal, as well as a 50,000 cash prize. Raspberry Pi founder Eben Upton told IT Pro he was "very, very happy" with the win.

"If you look at the [MacRobert Award's] Wikipedia page, it's quite fun; there's the Severn bridge, Rolls Royce have won it twice... It's a lovely set of people to be amongst."

"We don't just see it as recognition for the engineers," Upton said. "A lot of effort's gone into the Raspberry Pi, and it's broad effort - there's a lot of people who can point to a bit of Raspberry Pi and go 'that wouldn't be there if it wasn't for me'."

The Foundation took home the top gong for its $35 microcomputer, released in 2012. Originally designed to help encourage children to get into computing, the Raspberry Pi family has become a global phenomenon, with fans using them to create everything from home theatre systems to aerospace equipment.

"The Raspberry Pi team has achieved something that mainstream multinational computer companies and leading processing chip designers not only failed to do, but failed even to spot a need for," MacRobert Award judge Dr Frances Saunders said.

"With a team of engineers numbering in the tens, not hundreds or thousands, Raspberry Pi has redefined home computing for many thousands of people across the world, even taking 1% of the global PC market. Their refusal to compromise on quality, price point or functionality has resulted in a highly innovative design that has taken the education and maker market by storm, and they have created a world-beating business in the process."

"All three of this year's finalists demonstrate exceptional engineering, but what sets Raspberry Pi apart is the sheer quality of the innovation, which has allowed the computer to be used far beyond its original purpose," said MacRobert Award chair, Dr Dame Sue Ion. "It is manufactured in the UK cheaper and at higher quality than elsewhere."

"Raspberry Pi has also inspired multiple generations to get into coding: children are learning about coding for the first time, often alongside their parents and grandparents. Communities in the developing world are being empowered by the Raspberry Pi and its modern day computing-on-a-budget."

Upton and the rest of the Raspberry Pi team were particularly thrilled to receive an award with such a prestigious engineering heritage. "It's a really nice bit of recognition," he said. "We really wanted this one."

"For engineering, it's the ultimate prize, right? Where do you go from there?" he said, joking that "we could win an Oscar, I suppose".