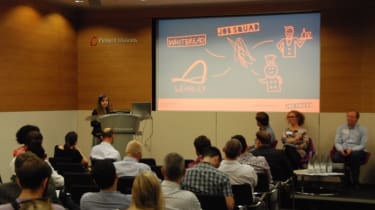 Job Squad is creating an online platform which helps hospitality venues access temporary staff on demand from any agency in the UK, and competed against six other startups in front of judges including ex-technology editor of the Guardian, Charles Arthur, and partner at Pinsent Masons, Thilo Schneider.

Laura Baines, who founded Job Squad, told IT Pro that the win was more validation from people who aren't necessarily in the hospitality industry that she is on to something. She said: "When I speak to hospitality people they all get it straight away, it's selling it to people who aren't that's tricky."

Baines, who had already participated in a previous Techpitch representing a different company, wasn't expecting to win. She pointed to other startups who pitched including one called Ernest, an AI personal banker. She said: "I know that the use of AI and stuff is quite hot and usually when AI comes up in a competition, it's like... AI is the best. It's more validation [of Job Squad that we beat an AI startup], I would say."

Ernest still won the audience vote, with Job Squad coming in second, and the AI banker came fourth in the judges' vote. The second and third-placed runners-up of the judges' vote were TweepForce, a startup that helps businesses sell things directly through Twitter, followed by Swytch Mobile, an app that provides multiple mobile numbers on one phone for businesspeople who want to rely on just one device.

The judges said they were impressed with the originality and clarity of Baines's pitch, as she used her own images and they said it was a little more creative than the others. Job Squad is currently building its own tech, which it hopes to test over the summer with its partners. Following that, Baines aims to secure more partnerships or fundraise so she can continue to build the platform around the needs of recruitment agencies.

While she won a bottle of champagne, all participating startups get free legal consultation with Pinsent Masons as part of its Bootlaw initiative.

Techpitch 4.5 allows startups to pitch their ideas to a wide audience made up of journalists, investors and analysts. Startups also receive feedback from an expert panel of judges and can then network with the audience after the event.