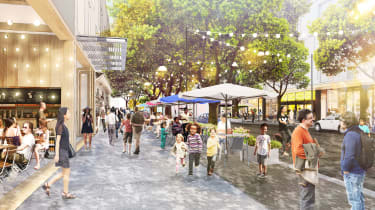 Facebook has announced plans to build 1,500 new homes as part of a new campus near its Menlo Park headquarters in Silicon Valley.

As well as housing, the Willow Campus will also include shops, restaurants and public spaces. The company expects the review process to take around two years, with the first phase of construction scheduled to be completed by 2021.

"Working with the community, our goal for the Willow Campus is to create an integrated, mixed-use village that will provide much needed services, housing and transit solutions as well as office space," John Tenanes, the company's vice president of global facilities and real estate, said.

"Part of our vision is to create a neighborhood centre that provides long-needed community services. We plan to build 125,000 square feet of new retail space, including a grocery store, pharmacy and additional community-facing retail."

The new campus is partly an effort to combat the housing crisis currently gripping Silicon Valley and the San Francisco Bay area, a crisis which has been exacerbated by tech companies like Facebook.

As the valley's tech companies have scaled out, their workforce has expanded too, leading to a vast influx of workers to the area over the past few years. The housing market and local infrastructure has struggled to keep up, with soaring rents and low availability hitting many local residents.

Google has also announced a similar scheme, which will see the company shell out $30 million on 300 apartments for staff at the company's base in Mountain View.

Menlo Park mayor Kirsten Keith has endorsed the plans, stating that residents are looking forward to taking advantage of the new public amenities, and that more companies should follow Facebook's example.

Peninsula cities have a #HousingCrisis. I hope more tech companies come forward with #affordablehousing proposals as @facebook has done. pic.twitter.com/c9sAOA7k1D