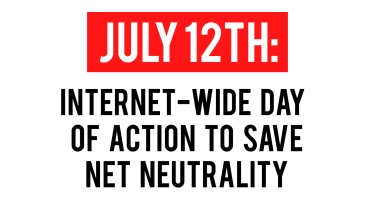 Tech giants such as Amazon, Netflix and Facebook are joining in with a host of activists, free speech groups and more in a day of protest against the Trump administration's plans to roll back rules on 'net neutrality'.

The protest is taking place as Ajit Pai, the new head of the Federal Communication Commission (FCC), is preparing to dismantle tough rules protecting internet access in the US following pressure from cable companies and internet service providers.

Pai is a longtime critic of the 2015 'open internet' rules which he says came about because the FCC "succumbed to pressure from the White House". He said a heavy-handed regulatory framework was imposed on all ISPs and compares them to "utility-style regulations". Pai, who was designated chairman of the US telecoms and media watchdog by president Trump in January 2017, proposes a return to "the Clinton-era light touch framework that has proven to be successful". Pai has named his proposal "Restoring Internet Freedom".

#NetNeutrality is the First Amendment of the Internet. It prevents your ISP from censoring you. Defend it: https://t.co/S8d0OxZQe0 RETWEET! pic.twitter.com/4HMQT8uaww

The Electronic Frontier Foundation, a digital civil liberties organisation, claims that the proposal would leave the door open to ISPs creating "internet fast lanes" that prioritize certain websites over others. It called for websites to "give the world a preview of what the internet will look like if the FCC goes forward with its plan to dismantle open internet protections".

The EFF wants to do this to highlight that giving up protections for net neutrality will give ISPs a "frightening" amount of control over a user's internet experience. To take action, users can use the EFF's web form to send a letter to the FCC, who are accepting first comments on their proposal until 17 July.

The websites involved in the protest will be simulating what it will be like for users if they try and access their content if the FCC won't let net neutrality be. This includes pretending that users will have to pay a charge to access their websites which could come into effect should Pai succeed.

"If we lose net neutrality, the internet will never be the same," said Evan Greer, campaign director of Fight for the Future, one of the leading groups behind the protest, "No one wants their cable company to have control over what they can see and do online. Internet users know that their freedom is worth fighting for, and on July 12, we'll fight to win."

Image source: Battle for the Net