Meg Whitman steps off HP board of directors

Chip Bergh will take her place 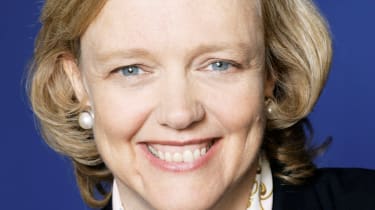 Meg Whitman has stepped down from HP Inc's board of directors, the company has announced.

Whitman became CEO of HP in 2011, before it split into HP Inc and Hewlett Packard Enterprise (HPE) in late 2015. She went on to become a member of the board of HP Inc, from which she is now stepping down, but will continue as CEO of HPE.

Whitman said: "HP has now been a standalone company for almost two years and I'm proud to have helped get the company off to a great start."

She will be replaced by Chip Bergh, who was elected by the board to take her place. He has worked as the lead independent director of the HP board since March 2017 and is also the president and CEO of Levi Strauss, where he has been since September 2011. He previously worked at Procter and Gamble for 28 years and his last role there was as group president.

Bergh stated: "I have deep respect for Meg, Dion and the entire HP board and leadership team and am honoured by this important role as HP accelerates its innovation agenda."

HP Inc president and CEO Dion Weisler highlighted how Whitman was instrumental in the formation of HP Inc and helped it to navigate early life as a separate company. He said: "I will be forever grateful to Meg for her many contributions. She is a terrific friend and advisor and will remain so as we continue executing on our strategy of reinvention."

According to a report by Bloomberg, Uber may be chasing Whitman to become its next CEO. The company has reportedly drawn up a shortlist of fewer than six potential candidates to become CEO, a position it wishes to fill by September and the HPE CEO has allegedly been meeting with the firm's leadership in recent weeks.

Whitman made her reputation at eBay, which she joined as CEO in 1998 when it had just 30 employees. In the 10 years she was at the company, it grew by about 15,000 employees and made $8 billion in annual revenue. She also ran as the Republican candidate for the governor of California in 2010 but lost to Democrat Jerry Brown.

Earlier this month, Tottenham Hotspur FC chose HPE as the IT networking and wireless infrastructure partner for the club's new stadium. The club is using Aruba to enable connectivity across the venue which it claims will be one of the most technologically advanced stadiums ever built.