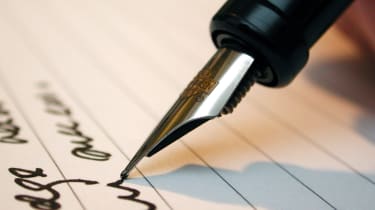 Christopher Lyddy, assistant professor at Providence College School of Business in Rhode Island, says mindfulness techniques are shown to improve business outcomes, but to his knowledge there isn't direct academic research looking specifically at the benefits of mindfulness in meetings, nor whether ditching laptops for pen and paper would help improve mindfulness. "I would suspect it could provide a number of benefits in a meeting, such as helping to keep people focused on important topics, reduce interpersonal conflict, and bolster creativity," he says of mindful meetings, adding: "I think that paper and pens impose a lot less distractions and tend to stimulate a different type of thinking. The old-school writing instruments might keep us in the here and now and therefore more mindful."

While there may not be much research into whether pen and paper boosts mindfulness, research suggests does improve note-taking in students. Daniel Oppenheimer, professor of psychology at the UCLA Anderson School of Management, has studied how note-taking differs on laptops versus pen and paper.

"We had people watch TED style talks and randomly assigned them to take notes either on laptops, or using pen and paper," Oppenheimer tells IT Pro. "While there were no reliable differences in how well people remembered straightforward factual material (such as names or dates), there was a difference on people's conceptual understanding. People who had been assigned to use pen and paper had reliably better understanding of the material. It's worth noting, however, that people using laptops had more complete notes although that didn't help them with conceptual understanding (relative to pen-and-paper note takers), even when they were allowed to review their notes."

While laptops can be distracting because of the internet, he noted that the main reason for the difference is people taking notes on laptops try to get down every word the speaker says. "People using pen and paper can't write quickly enough to do that, so they are forced to summarise the speaker's arguments in their own words," says Oppenheimer. "To do that, they have to think about, process and understand the information being conveyed, which helps them later with conceptual understanding."

That said, it doesn't mean handwriting is better than typing they should merely be used for the correct purpose. "Different media support different goals," Oppenheimer says. "Laptops are fabulous for taking complete records, but handwriting is better for facilitating understanding of materials.  If your goal at a meeting is to take down a record so that people who couldn't attend will have a good sense of what was said there, then laptops are better.  If your goal is to have everybody who is attending the meeting really understand the implications of a new policy, longhand is probably better. "

There's more to meetings than note-taking, of course. But bringing mindfulness into the office isn't as straightforward as it may seem, as people bring their focused practise into work in different ways, Lyddy noted. "While there is the traditional 'formal' meditation practice at home on a cushion, there are also various types of 'informal' practice on the go," he noted. "Workers might try to incorporate these models into their work-life. For example, taking a few seconds of pause as a 'prophylactic' practice before a potentially stressful meeting, as an 'antidote' practice during or after a stressful encounter, or an 'on the fly' practice as they walk around the office."

He noted that taking mindfulness further to actually meditating at work, in the face of ringing phones, interrupting coworkers and other other irritations, is not surprisingly "easier said than done".

To improve meetings, we may not need to go so far, with White suggesting one simple step to boost efficiency and cut wasted time. "This could be the challenge: could you cut all meetings down by a third if you got rid of the tech?" asked White, with everyone focusing on the task at hand. Whether that works for your office depends on the nature of your meetings, but anything is worth trying if it'll cut down how much time we waste sat around a boardroom table.