Where to find Britain's self-driving cars 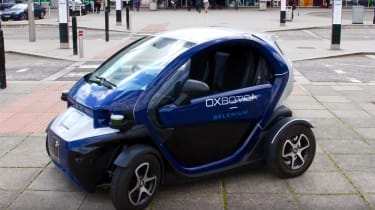 It's been said that the future is here, it's just not evenly distributed and that's true of self-driving cars.

For most of us in the UK, the only driverless vehicle we're likely to get a ride from anytime soon is East London's DLR, but head to Greenwich, Milton Keynes and Bristol if you want a sneak peak at the future of automated automotives in action. There are three main government-backed, British-led projects across the UK: GATEway in Greenwich; UK Autodrive in Milton Keynes and Coventry; and Venturer in Bristol.

Head to Greenwich on the right day and you could be forgiven for thinking you've stepped a few years into the future. The London borough is home to a variety of driverless projects, including take-away delivery robots, shuttle buses, and Ocado delivery trucks.

Under the GATEway programme, the first driverless cars to hit London's roads were developed by Oxbotica, a spin-out from the University of Oxford. Described as "pods" or "shuttles", they're essentially small buses without a driver. They travel up to 10mph carrying four passengers, guided by LIDAR and cameras through routes near the O2 Arena in Greenwich. 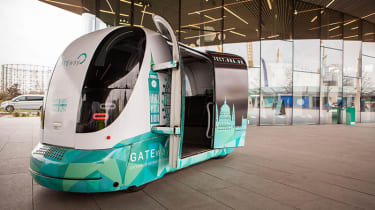 Dr Graeme Smith, CEO of Oxbotica, said at the time that the shuttle "represents an enormous step forward on our journey of implementing real world mobility-as-a-service capability in an operational fleet which can ultimately run without human intervention".

Head further east to Woolwich and as part of the GATEway project, grocery delivery service Ocado has been trialling tiny lorries, also developed by Oxbotica and using its Selenium software. The CargoPod lorries shuttle eight boxes of groceries over a 3km route through a local estate, dodging gates, street furniture and cyclists. During the ten-day trial, the CargoPod also carried two humans in the front seats. 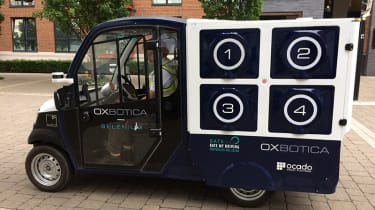 "The GATEway project is unique in that it considers the effect of automated vehicles on the movement of goods as well as the movement of people," Simon Tong, principal research scientist at transport firm Transport Research Laboratory (TRL) and technical lead for the GATEway project, said in a statement. "This trial with Ocado Technology provides an ideal platform to help us understand how and where these vehicles could best operate and whether people would accept, trust and like them as an automated delivery service in the city. We envisage that cities could benefit massively if deliveries could be made by quiet, zero emission, automated vehicles when congestion is minimal."

Cars, rather than pods, are also being trialled elsewhere in London, as part of private firms' efforts to develop driverless technologies. Nissan tested its automated Leaf electric car on a course around the Excel Centre in East London. Nissan's ProPilot tech is designed to let drivers have a break and take their hands off the wheel from time to time, rather than be entirely automated, with the car maker saying it plans to offer models that can handle most driving by 2020, with drivers only required to take the wheel in an emergency. Volvo aims to run similar trials on roads in West London later this year, using its Intellisafe Autopilot system.

The city of Coventry has become a driverless hub, with demos and trials of automated vehicles already shuttling locals between the train station and other destinations. The first project was the LUTZ Pathfinder, designed in part by Oxbotica. Those pods are two-seater, 15mph vehicles that operate on pavements rather than roads, watching for obstacles via lasers and cameras.

Some of the members of that project have joined the UK Autodrive programme, which alongside rolling out a fleet of 40 of the pavement pods is looking to trial more standard cars with automated skills later this year.

The UK Autodrive consortium which includes Ford, Jaguar Land Rover and Tata isn't only looking into fully driverless cars but connected ones, with vehicles able to communicate and share information.

In a demonstration at a private track in Nuneaton in June, the cars were shown warning drivers that an emergency vehicle was approaching from a certain direction and sent traffic information from road-side units, including warnings on speed limit changes or temporary lane closures. Plus, the connected cars knew when other vehicles were approaching a junction and could warn drivers that a collision was likely. Future versions of the connected cars will alert drivers when a car in front brakes, time driving speed to hit more green lights than red, and assign priority to a car when two approach an intersection without lights or signs.

The UK Autodrive project also showed off driverless technology at the Nuneaton track, with a Range Rover Sport autonomously steering through junctions and roundabouts, and dodging obstacles.

Those technologies are soon set for public road trials. Later this year, they'll head to Milton Keynes and Coventry on segregated bits of road, before fully open trials in 2018. "The successful completion of the proving ground trials marks a significant milestone for the project team, and we are now looking forward to demonstrating the benefits of these exciting new technologies in the real-world settings of Milton Keynes and Coventry," said Tim Armitage, Arup's UK Autodrive project director, in a statement.

The research is based out of the University of the West of England, with the trials happening across the private roads on the campus using a BAE Systems Wildcat. The first tranche of research has now been published, looking at how people handover driving to the car and vice versa.

The research found that people took 1.77 seconds to respond to a handover request the car telling the human driver to take the wheel and a further one second to resume active driving. That means the total handover time was close to three seconds. After a handover, drivers tended to keep below recommended speed limits.

"The findings from the driving simulator study, supported by similar experimental conditions used in the road study, suggest that designers of AV technology with handover functionality need to proceed with caution," the study said. "The experiments highlight the need to consider human performance under multiple driving conditions and scenarios in order to plot accurate takeover and handover time safety curves."

The next rounds of research will look at how autonomous vehicles interact with other road users at junctions how computer-driven cars can understand interactions such as when people indicate to each other with a nod of the head or waving each other through and also examine at interactions between buses, pedestrians and cyclists.

As part of the work, Venturer will not only stay on campus, but use a driverless pod on public roads later this year.

Oxbotica and its partners will get on the motorways between Oxford and London in 2019, with the DRIVEN consortium set to test autonomous cars as part of a 8.6 million project. Those cars will require level four automation meaning they can handle the road and all safety-critical functions without any human interaction and use Oxbotica's Selenium software.

The DRIVEN consortium includes Oxbotica, Telefonica O2, Transport Research Laboratory, Transport for London, and more including insurance firm XL Catlin, as figuring out how to insure automated vehicles presents a challenge. Oxbotica's Dr Smith, said: "We are seeking to address some of the most fundamental challenges preventing the future commercial deployment of fully autonomous vehicles."