As labs around the world create ever more powerful machines based on quantum physics, what will we end up doing with them?

Quantum computing has come a long way since its theoretical birth in the 1980s, with the works of Paul Benioff, Yuri Manin, Richard Feynman and David Deutsch. We still don't have functional, large-scale, universal quantum computers, but it might not be too much longer before we do.

Currently the domain of large companies such as IBM and Google, and physics research labs in universities, the search is on to find the best approach to building one. Leaving aside the work of Canadian company D-Wave Systems, which uses quantum tunnelling effects to solve problems, the two most successful methods for performing quantum computations are through the use of superconductors and trapped ions.

Superconducting computers make use of a Josephson junction: two superconducting electrodes with a barrier down the middle, which exhibits quantum effects when cooled to near absolute zero. Trapped-ion computers, on the other hand, suspend charged particles in magnetic fields to create their quantum gates and induce the desired effects.

These quantum effects include being able to enter a superposition of states. A silicon computer bit can be on or off (0 or 1), but a quantum bit, or qubit, can be 0, 1 or both at the same time. It's mind-blowing, but it works, and when fed the right algorithm it could achieve in an afternoon what it might take a classical supercomputer a billion years to compute.

That's pretty revolutionary, and the term "quantum supremacy" was introduced by Caltech's John Preskill to mark the moment quantum computers will exceed the processing power of conventional silicon. That point comes when we have a processor operating at around the 45-50 qubit mark, and some pretty big names think it might be approaching fast.

Earlier this year, Google announced it was planning to run a 50-qubit computer by the end of 2017, and IBM has plans to hit that mark soon too. Its latest machine, a superconducting model weighing in at 17 qubits, is still in the lab, but a five-qubit machine is running and available to the public, with a 16-qubit computer in beta testing. The IBM Quantum Experience has more than 50,000 users who have executed code more than 300,000 times, publishing their results in 17 scientific publications. There's even an API and code on GitHub to help you get started. 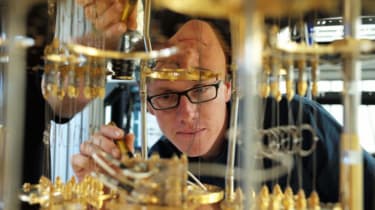 "Something you need to keep in mind is they should be perfect qubits," says Dr Stefan Filipp, a quantum computing scientist at IBM's research facility in Zurich, Switzerland. "That's qubits without any influence from the environment, without any noise properties. There's a grey zone around how many qubits you need to outperform classical computers, but 50 qubits is the first threshold. What we want to make is a universal quantum computer, and that requires perfect qubits, but we're realistic enough to know that you don't find perfect qubits."

What's needed is some form of error correction. "We know now that if we have 100 or 1,000 imperfect qubits, we can distill from them one perfect qubit." says Filipp. "So if you want to have 50 perfect qubits, depending on how imperfect the real ones are, we have an overhead of 1,000 or even more qubits.

"It's still the case that we need to build a system that's actually capable of outperforming a classical computer. We are quite certain that we can do this, but it's not clear whether this will be this year, next year or in five years."