As labs around the world create ever more powerful machines based on quantum physics, what will we end up doing with them? 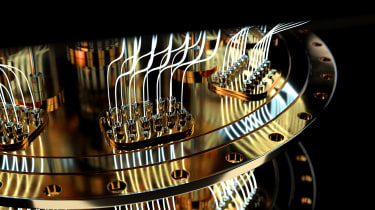 "Trapped ions are a very attractive candidate [for quantum computing] because they can work at room temperature," he says. "To solve really interesting problems, you need millions or billions of qubits, so imagine being able to cool all those quantum bits down to such a low temperature." We're talking 0.01K, or -273C, remember.

"The method to implement quantum gates with trapped ions has been to use pairs of laser beams," Hensinger explains. "They have to be focused to a precision of one-hundredth of the width of a human hair. That can be easily done if you have only a few ions, but imagine you want to build a quantum computer with millions and billions of qubits. The engineering requires you to have millions and billions of laser beams.

"We've been thinking about this for a long time, and developed an entirely different approach involving applying voltage to a microchip to do exactly the same thing. We can now replace millions and billions of laser beams with voltages. In a way it's exactly how a classical computer works -- the transistors in a microprocessor work the same way. You apply a voltage, and that executes logical operations." 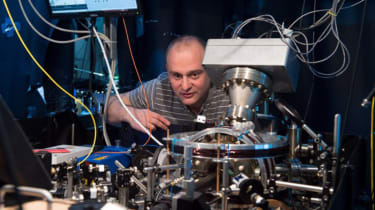 Sad as we are to see the back of quite so many lasers, at least the finished computer might be impressively large. "A quantum computer, because of the way it operates, can't be very small because it's unbelievably complicated to isolate the ions in such a way that the quantum effects aren't being destroyed by things around them, and that's where you get headlines about computers the size of football pitches," says Hensinger. The machine will need to be modular, with many smaller processors linked together using another innovation -- connectivity using electrical fields, a sort of incredibly fast quantum Bluetooth. "We could start building it today, but it could still take ten years to build a large machine."

Yet even if such a machine were built, what would we do with it? IBM's Quantum Experience has seen experiments geared toward figuring out what works on a quantum computer and how you write an algorithm for it. In the future, we could see applications in quantum chemistry, as Filipp explains: "To describe an electron system, you need two complex numbers. For 100 electrons you need 2100 such numbers, and it would take all the data storage available at the moment to even store these. But a quantum computer can handle it, because you don't have to store this information in a bitstream, but in real physical objects. And these quantum objects are described by quantum mechanics, so they have these numbers already intrinsically in them."

Hensinger has a slightly different view. "A quantum computer isn't a fast conventional computer," he says. "One interpretation of how it works is it makes use of computations across parallel universes -- and you can already see how mind-bending that is.

"It can solve certain problems in maybe a few hours that even the fastest supercomputer in the world would take billions of years to calculate. At the moment an example is breaking encryption, but for every problem you want to solve, you need to write a new algorithm that makes use of this strange ability to do things in multiple parallel universes. We're not going to take some software, run it on a quantum computer and it will run very fast. That's a misconception."

Hensinger draws an analogy with the Colossus computer created by Alan Turing and Tommy Flowers to crack Germany's teleprinter codes during World War II. "In terms of conventional computers, quantum computers are right now in the 1940s," he tells me. "We're very impressed by them, but we don't yet know what they can do."

And what's run on them needs to be tailored to their abilities. "There are about 50 people in the world, at most, writing quantum computer algorithms," says Hensinger. "The key problems are those a conventional computer could never solve; it would take forever. It's disruptive technology -- it can change an entire sector of business by adding capability that was previously not available."

This certainly sounds remarkable, but Hensinger's huge machines and Filipp's absolute-zero cooling systems don't sound very consumer-friendly. Will we all end up owning one? Filipp isn't sure. "I think when we have quantum computers that are capable of replacing a laptop, the cooling requirements will be solved, but it's not in the near term that quantum computers will replace desktop or laptop computers," he says. "Our vision of a quantum computer can do anything a normal computer can do, in principle, but you wouldn't use it for that because it's too complicated at the moment."

Credit for all images: IBM

This article originally appeared on our sister site, Alphr.