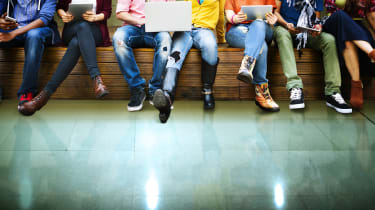 As Facebook has proven, brands (those that aren't Apple, anyway) can no longer rely on blind loyalty from customers if their product isn't up to scratch or fails to grab valuable attention. As a group they are far more transient than those that came before, making them more agile when it comes to jumping from one thing to another as soon as the zeitgeist shifts.

A recent study by eMarketer revealed that Facebook's 12-17-year-old user base in the US is set to shrink by 3.4% in 2017, while young users for Snapchat and Instagram continue to grow.

"Snapchat has faced criticism for poor targeting and lack of measurement. However, Facebook of all the social platforms excels in its targeting and reporting tools, so it's perhaps not the generation that's using the tool but rather the tool itself," Shaw says. "Gen Z has displayed an overwhelming preference for authentic, peer-produced content on top of traditional media."

This trend for influencers over advertisers and peers over experts is a key one to take note of if organisations want to remain relevant. Digital natives have had an unprecedented impact on how they consume media, sniffing out those that seem too corporate or disingenuous and opting instead for something that appears more customer-driven and authentic.

Dr Janet Bastiman, chief science officer and AI expert at StoryStream, says: "This isn't new. People change, and companies need to adapt to this. They also need to understand that we don't all fit in the same set of little boxes there's overlaps and this needs to be embraced.

"Rather than treating any group of people in a way you think they want to be targeted, let them show you what they want. Young people know that time is precious and will not waste that resource on interactions that don't appeal to them."

What can the industry do?

While it's true that companies need to do more to welcome this new demographic either as consumers or employees, it's also true that the reason many new apps, hardware and software fail is simply because they're not very good, or because they have entered a crowded marketplace too late in the game.

Damian Routley, regional CEO for UK, US and Canada at Adglow, says: "I agree that there's a different approach in communicating with an 18-25 demographic, than say, 55 plus. Facebook, Instagram, Snap and others have built tools with the younger demographic's user experience in mind video messaging and the ability to highly personalise with filters and stickers and hyper short form or snackable video content."

On both the consumer and the business side, it's obvious tech needs to begin to shift its mode of thinking when it comes to Gen Z. While the focus has understandably been on the millennial workforce for the past decade or so, the up and coming generation is a different beast - tech savvy, entrepreneurial and unwilling to stick with a product simply because it's what they've always used.

While this breed of young people have been targeted with some level of success by companies such as Snap and Instagram, the struggles of former golden child Facebook prove this may not last. Tech needs to stop thinking of them as a niche market, and start realising they'll soon be the mainstream.