Principality has the edge over London, argues IoT figure 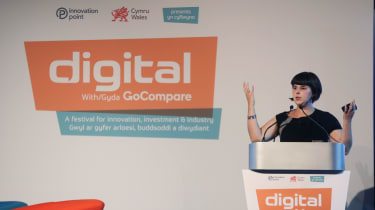 Wales is in a great position to become a leader in the Internet of Things, according to an IoT consultant.

Over the past two days, world-renowned speakers have been taking to the stage at Cardiff's Digital Festival to discuss the latest trends in technology.

The Internet of Things, a market that could one day be worth trillions, has been at the top of the event agenda. Alexandra Deschamps-Sonsino, named the world's most influential IoT expert by Postscapes, led talks on the topic.

As the founder of London's biggest IoT meet-up, she discussed the future of the industry and shared examples of her current favourite UK start-ups.

From a reusable coffee cup that cuts down on carbon footprint by sharing information about your favourite drink to a smart socket that monitors the welfare of elderly people, Deschamps-Sonsino said connected innovation is the future.

Although much of her work is about connecting the IoT technology scene in London, she argued that Wales has a competitive advantage over London. She believes that Welsh companies can make the most of the trend's opportunities.

"IoT is a space of real invention and is about being a real inventor. They're often not extravagant but are very useful and can help create profitable small businesses," she said in her talk.

"Formerly we'd think of it as a cottage industry; a small ecology of successful businesses making a small number of things.

"You can make a profitable business in this space by manufacturing just 5000 pieces and through the production of the Raspberry Pi, Wales has the manufacturing capability which we just don't have in London.  That bit is potentially the hardest piece of the jigsaw."