Documents and personal correspondence of William Hewlett and David Packard were not in blaze, says HP 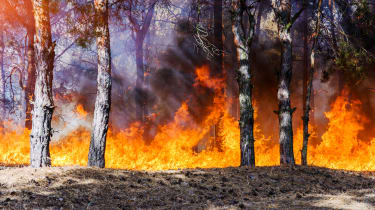 A historical archive of one of Silicon Valley's earliest technology startups, Hewlett Packard, has reportedly been destroyed in the fires that have swept through the Santa Rosa area in California over the weekend.

The physical archive, which contained 100 boxes of company documents, speeches and the personal correspondence of founders William Hewlett and David Packard, went up in smoke when the fires spread to two "modular buildings" on HP's campus, according to the Press Democrat newspaper. However, HP has since said this correspondence remains intact, and that the fire affected another archive.

The collection was reportedly valued at $2 million and dated back to the foundation of the company in 1938. However, it will have been considered by many historians as a priceless collection, chronicling both the earliest days of Silicon Valley and one of the most recognisable companies in technology.

HP was founded in a shed in 1938 by Hewlett and Packard, backed by just $538 in funding. Originally in the business of audio hardware, HP would eventually become the world's largest manufacturer of personal computers.

An archive was being stored at Keysight Technologies, which split from Agilent Technologies in 2014; both companies trace their roots back to HP.

The fires that engulfed the two buildings were part of the wildfires that spread throughout Santa Rosa county, killing at least 23 people and destroying 6,800 homes and businesses. The rest of the Keysight campus avoided most of the fires and sustained relatively little damage.

UPDATE 31/10/2017: An HP Inc spokesperson said in a statement emailed to IT Pro: "At the time of the separation of Hewlett Packard Enterprise and HP Inc., archives were established to ensure the 75+ year history was preserved. These archives are housed in Atlanta, Georgia. During the recent Santa Rosa fire, archives owned by Keysight Technologies (a company spun off from Agilent Technologies; once part of HP) suffered damage.

"Reports that HP founder archives burned are misleading. HP's sites were not impacted and archives remain intact in both physical and digital formats. HP's archives contain hundreds of items related to HP's founders including many examples of speeches, personal correspondence, writings and other materials. In addition, many other materials from the founders are part of public collections, such as the William Hewlett papers (1907-2010) held by Stanford University. The HP Garage where the company was founded is a historical landmark noted as the birthplace of Silicon Valley and serves as a private museum."

IT Pro has asked both HP and Keysight what archived files were actually lost.