Estonia's rise into a digital nation 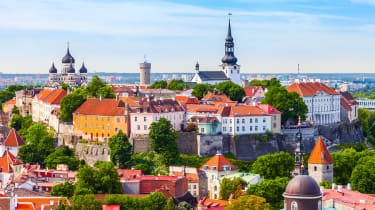 When it comes to moving infrastructure and services online, most nations' efforts lag well behind both the private sector and public expectations.

Butone small innovator, nestled between Russia and Latvia and bordering the Baltic sea, is far ahead the rest of its European colleagues in terms of digitisation.

Estonia, which currently holds the European Presidency, attracted EU leaders to Tallinn in September to encourage Europe to be more digital. It's in a position to do this because of its advanced digital society, where citizens can pay taxes online, possess a digital ID card providing access to the country's e-services (although this has recently experienced something of a security crisis), and own their health information. Blockchain technology has been tested in the country since 2008 and been in use since 2012 in its registries, including security and commercial systems.

In 2014 Estonia launched an e-Residency scheme, where entrepreneurs can found a business in the country and have full access to its services from anywhere in the world.

We talked to Toomas Ilves, who served as president of Estonia from 2006 to 2016, to learn more about the foundations which helped transform the nation into a digital bastion.

Explaining why Estonia choose to go digital in the first place, Ilves recounts how in 1938 Estonia and its northern neighbour Finland, which he says shares a common culture and fairly similar language to his own country, had the same GDP per capita.

"When we established independence [from the Soviet Union] in 1991, there was a 13 fold difference between the two countries," he says. "Finland was 13 times richer per person than we were. This certainly added a lot to the desire to do something big.

"There was a willingness on the part of the population, as well as large parts of the political class, to undertake something new and innovative."

The former president says one area where Estonia was on a level playing field was in IT. In all other areas, he says, countries had nearly 40 years of time to rebuild their whole infrastructure since the end of the Second World War.

"To put things in context, it was only in the summer of 1993, where we had already been independent for two years, that Mark Andreesen came up with the first web browser [Mosaic]. In fact, I bought the first web browser in the summer of 1993 and I said 'Well, there's no difference between us and the most advanced countries in the world in this one area' and I started to figure out what we should do to get people moving in the direction of digitisation."

Ilves became Estonia's minister of foreign affairs in 1996 and drove the Tiger Leap initiative, which sought to computerise the Estonian school system. The government approved of the scheme and by 1998 all the country's schools were online and connected.

It took ten years of work to construct the foundations of Estonia's digital infrastructure, which were laid in 2000 and 2001, but there hasn't been any major overhaul since.

"What we have done since then is dramatically increased the kind of services available but those are all based on the same thing, on the ground work established legally in the beginning of the millennium," explains Ilves.

In 2007, Estonia was hit by a huge cyber attack which paralysed it's IT systems. The DDoS attack shut down the country's servers and Ilves claims it was the first massive nation state oriented attack. "In many ways that will always be in the history of cyber because that was the first time it was a public use of IT [that was targeted]," he underlines.

Since then, the country has built up its cyber defences to the point that, the ex-president's believes, Estonia's approach to its security systems is more secure than anything anyone else has.

"The connections are based on public key infrastructure, the encryption is RSA 2048, we have a distributed data exchange layer which means there is no way you can access the entire database and get the kind of utter nonsense you've had here in the United States such as in the OPM hack, or Equifax. The system is very very difficult to hack," he explains.

For Ilves, the fundamental issue is that most countries aren't dealing with the idea of creating a digital identity. He says the current model, based on an email address and password, is about 40 years old and doesn't work anymore, as any password can be brute force broken. Instead, he says, two factor authentication should be implemented as a minimum.

"Until people, until society and countries accept the need to have two factor authentication with a sophisticated chip based system, whether it be cards, phones or anything else, that is not going to happen," he says. "Countries need to deal with the fundamental issue of identity, because the vast majority of hacks come from fake identities."

Ilves believes the power relationships that existed in the past, based on industrial might and physical size, are changing andif the European Union wishes to compete in the world it needs to take the idea of digitisation more seriously something Estonia is currently pushing during its presidency of the EU.

"Countries can be far larger than they would be in the old metrics if they're digitally powerful," Ilves explains. "They can be larger in terms of their functional size, digital intelligence or in the economy and administration."

He thinks there's a big push right now to move in the direction of the digitisation of society, even in his new home of Silicon Valley.

"This is the Mecca for innovation but at the same time the way you lead your life here, the kind of things you have to do don't really differ much from life in the 1950s, all your interactions with the government are basically paper based with physical signatures," he says.

"When it comes to the hardcore reality of paying bills, people still pay using paper cheques and if you want to prove that you live somewhere you have to bring in an electricity bill. From a digital point of view this is decidedly pre-modern."

Estonia and its previous president understand the need for digital change in Europe. The country is doing its best to bring this to citizens' attention during its presidency, which ends in December. If Europe aims to stay ahead of the technological curve then it may be wise to examine this Baltic country's recent past, digital infrastructure and paperless society.