The issue of tech companies paying their taxes comes to the fore again. But is anyone really doing anything wrong? 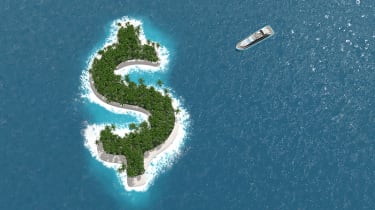 It seems it matters not if you're a Formula One racing driver, Apple, or a co-star in the TV show Mrs Brown's Boys, the lure of 'tax efficiency' is strong. As we've been reading this week, many have taken advantage of particularly aggressive avoidance schemes. Millions of leaked documents have been pored over by a collection of cooperating media outlets worldwide including The Guardian in the UK and the stories of who was involved and how have been headline news. These are all grouped together as what's being called the Paradise Papers.

The spotlight, for one, has moved back to Apple, a firm that has fiercely defended its tax operations in years gone by, with CEO Tim Cook adamant that the company has paid every dollar of tax that it has been required to pay. In an official statement released by the firm in the aftermath of the latest revelations, it insisted: "At Apple we follow the laws, and if the system changes we will comply."

A standard defence, perhaps, but a legally sound one, no matter how people feel about it.

Still, it's an age-old moral debate, one that's become particularly prescient in an era of digital globalisation. In March 2017, it was revealed that Google, for instance, paid 36.4 million in corporation tax for the 12 months ending June 2016, off the back of reported sales of 6 billion in the UK. Yet the firm argued that it had only made 149 million in profit on that. It manages this by outsourcing the booking of actual sales to its Irish operation, where the according tax rate is notably lower.

Amazon, meanwhile, banked nearly 20 billion of business across Europe in 2016, and paid 15 million in corporation tax on it. It's entirely legal way of doing this was to run lots of its business through Luxembourg, which has lower demand for Star Wars DVDs, but far more generous tax arrangements. A separate company, Amazon UK Services, which covers logistical and warehousing services in Britain, halved its tax bill to 7.4 million, off turnover of 1.46 billion.

None of this is likely to surprise, and perhaps understandably, the majority of big companies shuffling their cash around the world want to settle their money where it'll be taxed the least (the Paradise Papers report that Apple alone is sitting on some $250 billion, a bigger cash reserve than many countries). But what is changing is the court of public opinion, and that may be the catalyst for many to change their ways. In an environment where the Paradise Papers can leak, the veil of secrecy doesn't look quite as safe anymore.

You only have to look at Starbucks in the UK to see how that can have an impact. It found itself in the discomfort of the spotlight courtesy of the revelation in October 2012 that it had paid just 8.6 million in tax since its first UK branch opened in 1999, despite selling $3 billion of assorted beverages. Starbucks initially protested that it was all above board, but as many commented, if you can't make a profit charging 3 for a coffee, perhaps you shouldn't be in business in the first place.

It was damage to reputation, availability of choice and public opinion that brought about Starbucks' change in policy. Most high streets aren't short of coffee shops, and the firm quickly approached the UK government about voluntarily paying extra tax. Its UK tax contributions have increased since.

Aware of the damage that tax avoidance can do to reputations, particularly in fiscally-challenging times, firms are becoming more secretive. One revelation in the Paradise Papers includes an Apple memo, sent to the company Appleby, which arranged some of the company's tax affairs, that read "for those of you who are not aware, Apple [officials] are extremely sensitive concerning publicity. They also expect the work that is being done for them only to be discussed amongst personnel who need to know".

The difference between an Apple or Amazon against a Starbucks, though, is competition. It's easy to switch coffee provider, but if you're glued to the interface of iOS on your phone, or the convenience of Amazon, that's unlikely to change without a very obvious competitor that can pick up the slack. Both they, and Google, are so dominant in their fields that it makes them bulletproof, at least for the time being. Amazon was said to have taken a reputation hit over the revelations about its tax affairs, but it didn't stop revenues growing. People are angry, but still adding products to their cart.

And that's why the Paradise Papers aren't likely to ignite changes anytime soon. Certainly, it seems unlikely that customers will exert the influence they have over companies in a more fragile position. Unless governments act because it's worth reiterating again that the firms concerned have done nothing to breach tax laws then the Paradise Papers will just be another chapter in a scandal that'll surface time and time again.