"There's no such thing as too big to fail," CA boss tells CA World 2017 attendees 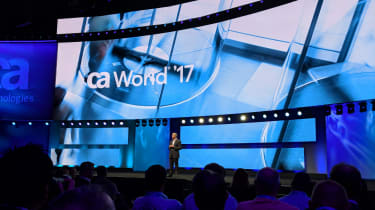 CA Technologies CEO Mike Gregoire today kicked off the company's annual conference in Las Vegas by urging businesses to empower their employees to be more creative and to take greater risks.

Gregoire talked about the importance of being able to pivot your business model, should the need arise. He pointed to the example of Leadville, Colorado - a dying mining town that was revitalised when it rebranded itself as a destination for extreme sports enthusiasts.

Organisations that don't have the inclination or capacity to adapt to change are at risk of being left behind be more agile companies, he said, citing the examples of Netscape and Eudora as companies who didn't move fast enough, and were left behind as a result.

"It's not good enough to be good, or even great," Gregoire warned. "If I know one thing about the tech industry, it's this: There is no such thing as too big to fail."

"With digital business change being a top CIO priority, existing IT infrastructure and applications, as well as business processes, must accommodate the 'new' quickly and rapidly," agreed analyst firm Gartner. "If legacy systems fail to support, integrate or enable these new digital initiatives, digital business success will be impaired, or even fail."

"Playing it safe can actually be the most risky decision you can take," he said. "I believe change in your companies will be driven by you, the technologists - the ones who aren't afraid to take the risk."

The best way for companies to fuel this change is to unleash their employees' creativity, according to Gregoire. Gregoire explained how Eurosport, Netflix and Citi are using CA's tools to pivot in various ways, exploring interesting new use-cases and applications. Highlighting some of CA's more prominent and impressive customers has become a running theme at CA World, and it's something that Gregoire took evident pleasure in.

"Software is the creative medium of our age," he said. "In fact, writing software and digitising processes is legally considered a form of art."

In addition to public companies, Gregoire also took the opportunity to show off CA's government customers. The Singapore government, Montreal's transit authority and the FBI are all using CA's tools in order to become more agile and efficient.

Gregoire's keynote reinforced some of the biggest themes of CA's recent strategy - a focus on agility, transformation and rapid change. The software revolution is going to let businesses explore new opportunities and keep themselves ahead of the curve, Gregoire said; but they have to be ready to take some chances along the way.