Is it worth making anything in the "service-as-a-service" world?

With the consumer interface holding growing power, what’s the point of actually investing in stuff anymore? 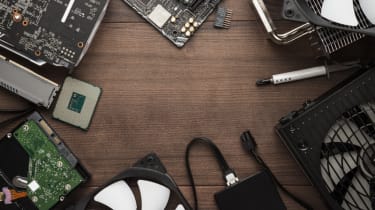 The theory of product development always seemed to be that it was cheaper to go second. To let someone else do the pathfinding, then follow up quickly, benefit from lessons learned, and aim to cash in. In the consumer space, for instance, the Sony PlayStation was a natural successor to all-but-forgotten machines such as the Amiga CD32. Microsoft Office, meanwhile, stood firmly on the shoulders of WordPerfect, taking the nucleus of the idea there and growing it. Going second isn't without risk, but those you do face are fewer and less severe.

Increasingly, however, the actual making of a physical product, or generating work of your own, seems a bit of a folly. The companies that have emerged in the last couple of decades and grown to heavy riches have done so arguably more on people's backs than on their shoulders. Let others do the heavy lifting and instead provide the mechanism by which they can showcase their efforts, then slice off a chunk of margin.

A bit harsh, perhaps, but there's something to it. eBay was the pioneer here. Without having to manufacture a single product of its own, it put together an auction platform, that's subsequently effectively migrated to a storefront system too. In its case, it was genuinely innovating, and taking risks, for which it's been rewarded heavily. By providing an online shopping destination that attracts millions of people a minute, it's gone from being the convenient place to list items for sale to one of the few with guaranteed reach. Amazon, by distance the biggest online retailer in the UK, is another.

But this aggregation business approach grows elsewhere too. Facebook publishes millions of words a day, umpteen videos, another cavern-full of images and assorted smatterings of -- yes! -- digital content. How much does it author? Next to none of it, but it feels the benefit every time someone posts something new. Yet through the service it offers and the unrivalled reach it has, publishers are in some instances now eschewing posting articles such as this on their own sites, and just popping them straight on Facebook. It's become an unbeatable giant.

Uber and AirBnB are the latest examples to emerge, a collection of companies that The Independent a year or two back clubbed together as the 'content non-generators'. It concluded, that "the interface is where the profit is".

It has a point.

Although lots of people try and come up with these interfaces that simply don't catch on -- it's not as if the Facebook, Uber or eBay models were without significant risk -- once you're cemented at the top of the proverbial pile, you become hard to topple. Furthermore, the moving of services online that we've seen over the past two decades hasn't, it turns out, seen consumers embracing the wider choice, and the convenience offered. Rather, it's seen them building and cementing status quos. The more choice people have, the fewer decisions they seem to want to make.

Couldn't this all just be seen as indicative of the importance of the services sector, though?

The UK has been a service economy for some time now, with the latest government figures suggesting service industries account for approximately 80% of the country's output.

To mourn the loss of widespread hardware manufacturing in the UK, though, would be to pore over the results of a match long lost. The concentration of technology manufacturing in Eastern nations is long established, and even many end consumers are likely aware that the range of brands on offer hides a far smaller number of factories actually making the core technology.

But as has always been the case, big companies leave interesting niches behind. Crowdfunded hardware has offered some degree of meritocracy, and at least a way to market for innovators with product ideas. Then there are sectors such as education, with many schools for example preferring local suppliers over big conglomerates, for added peace of mind. Locality is something that is of considerable importance to many smaller organisations and institutions.

The nimbleness, and growth, is often being found by companies who eschew as best they can price wars, and offer something extra. Quality, fast service is an obvious plus points, and the company that lets you pick up the phone and talk to a human being is generally the one you want in a crisis. But also, products with an environmental slant are generating good business, for instance.

Is It Worth It?

Going back to the core question, though: is it worth actually making something? Given that that technology industry has, for a good chunk of the market, centred on assembling parts that others have made, or reselling product, there's an argument that such an avenue remains open and potentially lucrative.

Beyond that, it's hard not to think that the barriers to entry to lots of markets have rarely been lower, given the platforms that are now available to reach customers. Conversely, the barriers to making a success of a new product launch have rarely been higher. And if success is enjoyed, chances are that some interface service is going to take a slice as part of that.