The team looks back at a year full of data breaches, political meddling, and embarrassing speeches by Amber Rudd 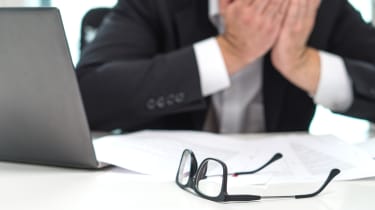 The IT Pro team shares their thoughts on a year full of hacks, data breaches, ransomware, political meddlingand systemic sexism - although, it was a great year for artificial intelligence at least.

The sheer number of hacks in 2017 is pretty unbelievable, but they highlight the importance of data protection measures, which the EU's General Data Protection Regulation (GDPR) will make law come May 2018. In the meantime, and in preparation for Brexit, it's great to see the UK enshrine similar rules into law to protect UK citizens with the new Data Protection Act. The problem for businesses is achieving compliance with the tougher rules, but even showing progress towards this, as well as treating people's data seriously, should be enough to avoid an awful fine from the UK data watchdog.

The year also saw startups fearing the impact of Brexit, and some already experiencing difficulty finding funding. The Autumn Budget saw the government commit 3 billion in case an increasingly likely hard Brexit becomes reality, but measures to train more people in digital skills feel like they'll come too late to stop the digital sector suffering when the UK loses access to EU tech workers. Similarly depressing statistics surround women in tech, which is economic madness - we have failed to encourage more women - half the UK's population - into digital careers, and now we have a huge skills gap as a result.

More widespread use of cloud makes a lot of sense as businesses shed their legacy skin, and it's also underpinning a drive towards automation, through the adoption of AI and machine learning software. The next step here is to democratise the creation of AI applications, with AWS for one opening up tooling to make this possible.

My lowlight of 2017 has to be the vulnerability of our NHS to hackers. The fact that common sense and basic levels of security were not considered as standard, which could have prevented the shambolic episode from happening in the first place, is beyond a joke.

Thankfully, it looks like the NHS has learned from that gigantic error as there are reports the body plans to work with ethical hackers to test its defences in future. Fingers crossed we don't see a repeat performance of the bad times in 2018 or beyond.

My highlight of the year, however, has to be the great AI use cases we've already seen and the ones we've been promised are just on the horizon. As just one example, the potential for doctors to spend more time caring for patients and stamping out horrible diseases through enhanced intelligence is a wonderful thing - who would have thought this type of technology would have moved from science fiction to fact in our lifetime?

For me, it's great to see so many startups coming to the light this year and bigger companies, like Cisco, setting up incubators to encourage entrepreneurs to create something new. Even Facebook will have a dedicated space for startups in their new London office and hopefully, other companies will follow suit. Despite this, a lot of startups are worried about the year ahead, especially with Brexit on the horizon; will they be able to succeed with this challenge ahead?

It's good to see the UK invest in driverless cars, too, especially with the news that Jaguar Land Rover's first self-driving vehicle hit the UK's streets back in November. The CBI are also doing their best to tell the government how important AI technology is and want it to create an AI commission.

I am worried about how much Russia has been meddling in Western democracies around the world and it's got to the point where Parliament's intelligence committee is exploring whether to launch a full investigation into the matter. Governments and businesses need to ensure they are secure, especially with this news in mind, and it doesn't help when several EU countries have had to recall their digital IDs thanks to encryption vulnerabilities. If the post-Brexit UK decides to implement an ID card for citizens, along with a digital ID, we will need to ensure it's secure and avoid this from occurring in the future.

There are three topics that have dominated the business technology discussion this year: AI and automation, IoT, and security.

AI and automation have continued to cause a stir, with more practical, business-oriented uses being demonstrated, as well as the growth of AI in the home and office. Whether you agree with increased automation or not, it's clearly the inexorable direction in which we're travelling.

Finally, IoT is starting to come out of the hype and into reality (and I'm not just talking about its long-time home in manufacturing), with various tech companies producing core hardware and other products that take advantage of this emerging field. Once again, this has been the start of a trend that's sure to continue into 2018 and beyond.

One of the most entertaining and/or depressing things about 2017 has been the extent to which business keep repeating the same mistakes. Unsecured AWS buckets have led to countless data leaks, unpatched systems opened Equifax (and millions of its customers) up to a colossal hack, and Deloitte was stung partly through a lack of two-factor authentication. Even the world's top businesses, it seems, are unwilling to learn from history.

On a slightly more positive note, businesses really seem to be opening up to the idea of building mobility into their IT deployments, moving to cloud-based services and ultra-mobile device deployments. If this trend continues to take root in 2018, we could see a real boost in productivity.

Although 2017 will be seen as the year of the security breach it should perhaps be better remembered as the year we realised the government has absolutely no clue when it comes to IT security.

Whether it be through a lack of investment in highly vulnerable services or embarrassing MP speeches about topics they clearly know nothing about, our policymakers are showing how just how out of their depth they really are.

WannaCry may have taken the government by surprise, but for security experts, it was a long time coming. The NHS eventually received funds to replace their long-outdated Windows XP-based systems, it's just unfortunate that it took crippling ransomware attacks before the government took notice.

And while it may be cathartic to see the likes of Amber Rudd perform such a monumental cock-up on a subject like encryption, it's still worrying that those schools of thought are circulating around Westminster, among individuals with the power to fundamentally change our security landscape.