With GDPR on the horizon, 2018 promises to be an eventful year for tech. Here's some predictions from the IT Pro team 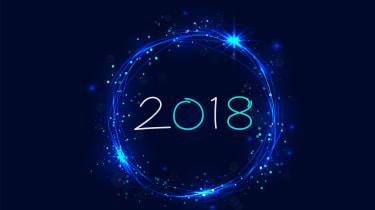 2017 was a busy year in tech, with lots of things to keep us entertained, worried and wondering. So, what will 2018 have in store? The team have dusted off their crystal balls to give their thoughts on what the year ahead may bring...

Automation will be a growing theme of 2018, building on the steam AI's built up in the last couple of years. Not only is it one of the only practical versions of AI currently available, but it is a big win for companies - making back-office processes much more efficient and freeing up staff to focus on higher-value tasks.

Sadly, I can't see a similar focus on those whose jobs will become automated. Despite repeated warnings, and making the right sounds, the government isn't any closer to retraining people whose jobs will soon be done by robots. The tech skills crisis will remain unsolved for a long time because the only way to solve it is to address school-age education and encourage more girls to learn computer science. Even getting that right tomorrow won't see a spike in developers and security experts for at least a decade.

Maggie Holland, Group Editor - an uncertain time for many

Brexit worries will continue to dampen some enthusiasm for investment in the tech sector, with many being cautious because they're not sure what lies around the corner in 2019. Others, however, will look upon this uncertainty like a mini-recession where those who cut back stood still until the bad times were over, whereas for those brave enough to take risks many prospered and came out ahead post-recession.

Elsehere, I believe we'll see a continued focus on so-called disruptive technologies such as AI, machine learning and robotics. We've only just touched the surface of what is capable here so I expect lots of developments and projects in these areas in 2018 and beyond.

For all the uncertainity and disruption, though, there will remain much to be enthused and excited about when it comes to tech and innovation in 2018. I'm certainly looking forward to the year ahead to see how things pan out!

2018 is going to be a very interesting year for tech. I want to see more opportunities for startups to grow which means more incubators and accelerators in the tech landscape. We need to support them, now more than ever, and ensure Britain continues to invest in its technology so we aren't left behind.

Similarly, we also need to make sure we are prepared against huge nation-state cyber attacks, which we saw this year with WannaCry, and also we should be more worried about external actors influencing our politics through social media. Apart from that, I think more self-driving vehicle companies are going to launch trials of their tech - so keep your eyes out for cars without drivers on the UK's streets and motorways!

In some ways, it's hard to predict what will happen in technology this year. The growth of the attack surface, thanks largely to the Internet of Things (IoT) and consequent growth in the number of connected devices, presents a serious security challenge. This could easily mean a growth in botnets, in large-scale attacks and indeed a rise in the background level of malware infections and other issues. On the other hand, the massive hacks of 2017 that caused serious disruption and reputational damage to companies like Equifax and Uber, as well as mass ransomware attacks like WannaCry and NotPetya, may have spurred organisations to take security more seriously.

Outside of security, I do think that we will see some breakthroughs in self-driving technology, which will accelerate the development of all the supporting infrastructure that goes around that - including 5G. There's been a lot of talk on both these subjects for a number of years, now I'm hoping to see some action.

2018 is going to be the year that AI technology really takes off. Machine learning has crept into all sorts of products and service over the last 12 months, but as consumers become more comfortable with interacting with AI through chatbots and digital assistants, we're going to see the technology becoming a greater and greater part of our daily lives.

Next year could also see the death of social media as we know it. Companies like Facebook and Twitter are facing increasing pressure from legislators, which, combined with the unceasing parade of changes they're making to try and maximise revenue and growth, could leave the platforms that we've all become so used to unrecognisably altered.

Dale Walker, Staff Writer - You've had your fun Bitcoin, time to get serious

2018 is going to be all about disruptive technology, and it's almost certainly going to be blockchain's big year. Companies of all shapes, sizes and industries are snatching at opportunities to work with the emerging technology, if only to get ahead of their competition.

Similarly, we're going to see the real-world application of Bitcoin that proponents of the technology have called for since its inception. Speculative investments have created an unprecedented rise in value, but in order for digital currencies to taken seriously as a genuine alternative to traditional banking, the valuation needs to stabilise.

It's also possible that we'll see the rise of malicious AI. Not quite the Skynet style takeover that some envisage, but self-learning malware that's able to adapt to the efforts of security researchers is certainly in the realms of possibility. Who knows? Perhaps a rogue nation-state will even get its hands on a quantum computer.