Business travel in the 21st century 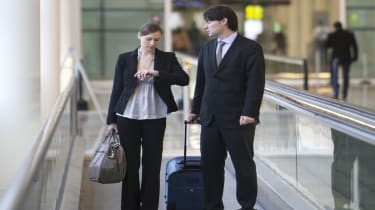 Newer planes often have power in the seat, and USB ports, but unless it's a newer airline like Virgin America you won't find that on every plane. In-flight Wi-Fi is very common on internal US flights and it's starting to appear on international flights too (BT has trialled it on a few planes including the Seattle to London route). Again Virgin America is still the only US airline that promises it on every flight; "Wi-Fi and power outlets are by far the most requested cabin amenity by our business travellers and on average, we see more than one third of guests logging onto in-flight Wi-Fi on our long-haul flights," a Virgin America spokeswoman told IT Pro. If you want to network on board, you can use the Here on Biz iOS app to find and chat with Linked In contacts who are on the same plane, or on another Virgin America flight; that could be useful for keeping in touch with colleagues travelling to the same meeting.

Virgin, Delta and United already have the slightly faster Gogo ATG-4 service which uses the EV-DO B cellular system and gets closer to 10Mbps than the 3Mbps of the original service, but that's not a lot to share with everyone else on the plane. A new satellite service called GTO (Ground to Orbit) will take that up to 60Mbps, and the first planes will have that this year (again Virgin America is first with that and has it on one plane already) but Wi-Fi on planes continues to be a victim of its own success, so don't rely on being connected.

Wi-Fi is one of the basic travel needs now. This was backed up by a recent NETGEAR survey, which found two-thirds of business travellers wouldn't go back to a hotel that had bad connectivity.

We're still waiting for Wi-Fi roaming that's as simple as the way your phone automatically picks up a new network when you travel (mobile operators are still working on the Hotspot 2.0 initiative) but you can get it now if you sign up with a service like iPASS, which lets you use a range of pay-for Wi-Fi services around the world for a single subscription.

BT Wi-Fi subscribers can get online for no extra charge with FON hotspots; check maps.fon.com to see where they're available and load up the app on your mobile device.

If you need to connect multiple devices to hotel Wi-Fi without paying for each of them, take the pocket-sized NETGEAR Trek N300 with you; connect to the hotel Wi-Fi through one device that the Trek knows about and it will share the connection with your other devices in our tests it was also more reliable for connecting mobile devices to flaky hotel networks than the official logins.

Mobile roaming charges between the UK and Europe are more reasonable these days, but they mostly remain high when you travel to the US. UK operator 3 has an unusually generous deal, even for its SIM-only tariffs, that lets you use your regular monthly minutes (for calls to UK numbers) and data allowance in multiple countries without extra charges. Incoming calls are also free with the 3 Feel At Home deal, but they can add up on other roaming deals.

If colleagues back home need to stay in touch, Skype may be cheaper than leaving your own SIM in your phone, or if your company has a unified communication service like Lync, load up the mobile app.

In that case, you can unlock your phone and swap in a local SIM (tell your carrier you're going abroad and they should send you an unlock code without charging you). If you need a local number often enough to sign up for a monthly tariff, MVNOs are usually cheaper than the brand-name networks; try RedPocket in the US.

T-Mobile offers a daily pre-pay 4G service for $3 a day that you can top up online (there's a small charge for the initial SIM); that adds up to more than a monthly tariff but is better value if you don't need it for a whole month at a time.

If you need to receive calls from home, Roamer is an app that gives you a VoIP call plan and forwards calls to your usual number on to whatever local SIM number you're using; you have to pay to use the app but people can reach you on the number they already have for you.

If you need data rather than calls, you might get a better deal with a wireless hotspot like a MiFi which lets you connect other devices over Wi-Fi; if you don't need much data, US freemium network FreedomPop gives you 500MB of free data a month if you buy a MiFi from them. If you travel to a lot of different countries, the Goodspeed mobile Wi-Fi hotspot has slots for up to nine local SIMs so you don't have to swap them in and out to get online; you can buy SIMs from Goodspeed for different countries and get online from 5.90 a day.