The cultural changes of agile working 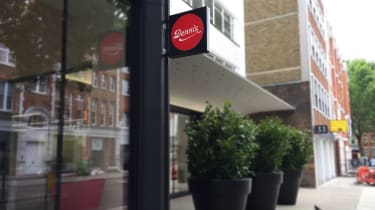 Part of Dennis' move to being an agile company involves moving to new client devices and office hardware, but an equally large part of it is a wider cultural change. Often, this can be the more difficult element of digital transformation - after all, no amount of CapEx is going to change employees' habits overnight. We spoke to Dennis CTO Paul Lomax about the role cultural considerations played in the company's move to the office of the future.'

One of the biggest changes in the new building is that people no longer have their own desks. Has this been hard for staff to adjust to?

That's the big cultural change, and it will be a bit of a mindset change. When we started showing people floorplans, the first thing they wanted to do is start putting names on seats, and it's quite a hard thing to get your head around. Partly because also, people are going 'okay, how many seats have I got, how many staff have I got, what's my agility,' trying to work out how they're going to fit people in. but it's kind of approaching it slightly wrong.

Everyone's going to have a locker, so clearly you need a floor on which your locker's going to be, so you need a 'home base.' If your home base is the ground floor, for example, your locker will be on the ground floor, and that will be predominantly where you probably sit every day and where your team will gather, generally speaking, but you can sit on any floor if you want. I mean, you can go and sit next to the finance director if you really want - until he gives up and builds an office.

There's definitely the flexibility there to be wherever you want. We're not going full hot-desking in the sense of saying 'you will have to find a seat anywhere in the building, first come, first served', it's more 'this is your team's floor.' The average floor's got 35 workstations on it, so if you sit on a different bank of desks, it's not like you're a million miles away; you can't be more than three desks away, really.

Some staff members have expressed concern that there won't be enough room in the building to house everyone - what's the capacity like in practical terms?

In terms of workstations, there's room for about 80% of the workforce. So if everyone wanted a workstation with a monitor, keyboard and mouse, then it's 80% - if everyone's in on the same day. But there's two things: one is that you never, ever get 100% of people in the office. So, forgetting whether or not people are out to see clients, or walking around or whatever, there's holidays, sickness - we've got 28 days holiday a year, plus bank holidays, plus people on sabbatical and all sorts, right? So you can pretty much knock 10% off just on holidays, sickness and whatnot. And the other 10%, people are in and out of the building, working from home and whatever.

But there are enough places to work in the building for everyone and more, because we also have quite a large freelance contingent who are in our building. The day the magazines go to production, they've got production editors in and designers in, often you've got interns and graduates, we've got freelance developers coming in and out every now and then, depending on peak projects. We can have as much as an extra twenty to forty people in the building.

How has moving to the new building allowed Dennis to experiment with different working environments?

There's lots of different types of places to work. There's your traditional workstation, but you've also got focus areas. There's a couple of dozen one and two-person rooms, which are like small offices - they're actually quite spacious. You can use it either for two people working on a project together, possibly three if you want to, but you could also just have a meeting in there, one-to-one, you know, chat, catch-up, that kind of thing.

We've intentionally left those blank, if you like. We debated about putting a screen and a keyboard in, but actually, we wanted it to be a flexible space so if you just want to make a phone call, you want to do some old-fashioned editing on a piece of paper, you can use it for  whatever you want. You can go and work in those spaces, you can book them.

We're trying to discourage people for booking them for more than a few hours, we don't want people sitting in there all day, but if a salesperson really needs to concentrate on getting a deck out for a proposal, sometimes you just want to sit in a quiet room and work on that. At the moment, we've got people booking an eight-person room for one person sitting in there to write a proposal, to get some peace and quiet. It's not a good use of space.

How does the new working setup reflect the changing needs of the business?

Actually, what we've found, if you take a long, hard look at Dennis, is that we've become much more integrated as a business. In the olden days, with print, it was very siloed. Each editorial team had its own little silo, with their own deadlines to worry about, and never spoke to anyone else; they saw themselves as being their own magazine first and Dennis a distant second.