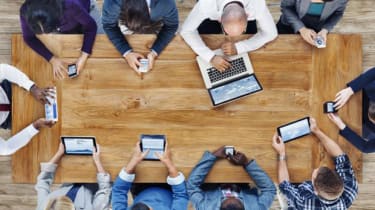 Dennis Publishing's transformation to an agile workplace has not been a simple or quick one, and many different elements go into building the office of the future.' The provision of new client devices is a substantial part of the process, as is designing in a workspace which not only allows but actively fosters and encourages collaboration.

One of the most vital aspects, however, is the IT strategy that underpins the whole endeavour; the collaboration tools and platforms that act as a lynchpin for everything else to revolve around. Whether your business is rolling out G Suite, Office 365, or a combination of solutions, the ability to collaborate effectively is key to agile working.

We spoke to Dennis Publishing's CTO Paul Lomax to find out what role the nuts and bolts of collaborative tools played in the planning and execution of the big office move.

How have you designed the new building's IT infrastructure to foster collaboration?

Every single meeting room will have an Apple TV, so if you're on an App

le Mac device or an iOS device, you can AirPlay (or you can watch Netflix, if you want), but also, every room will have a Chromebox - so you don't actually need to plug in.

In the client-facing meeting room suites, we have gone with an HDMI cable - because when a client or an agency or a supplier comes in and wants to plug something in, we have to be able to support that - but in all the internal meeting suites, we've not got a cable. No cables. You want to present? You present over the air, be it AirPlay, Chromecast or Hangouts.

There's a small amount of money saved in terms of cabling and all that kind of jazz but actually, it just made the whole meeting suite much less cluttered. It's just less hassle. Fewer things to go wrong, arguably, in terms of cables going wrong and that sort of stuff.

There is a secret ploy there, which is: I want people to use the Chromeboxes. And if they're just sitting there for using videoconferencing, people won't use them. If they have to use them to present, they'll use them, then they'll start thinking 'OK, people can dial into this'.

Because in terms of the agile space, it's not just about agile within the building, it's about agile in and out of the building. We've got one regular meeting, actually, that I'm involved in, where it's a big old meeting, there's about eight people, it's a big project, and not everyone can make the meeting. So every week, we've had one or two people dial in on hangouts.

Basically, we're finding that if you want to do a daily stand-up with your team but half your team aren't in the building, have them dial in remotely. It's not quite the Demolition Man boardroom yet, but it's not far off.

Has the move to a more collaborative, agile office environment done anything to break down the separation between departments?

That's helped by Google Apps and G Suite. Half the company had adopted it already, using consumer accounts, and all I was doing was making it official, and bringing it to people who hadn't used it and hadn't seen the benefits.

Half the company is incredibly collaborative by the nature of what it does. Some aren't, and there's always going to be people who work in their own silos, but I think there's a whole bunch of things we do now that we couldn't do without a collaboration suite. And we use Slack as well as G Suite.

Slack's really reduced barriers between teams, removed silos; you can go and sit in another team's channel if you really want and see what's going on. I get a lot of ambient information about what's going on in the company that I would never see otherwise.

And also, the CEO - he's getting a whole bunch of stuff from the ground that he wouldn't otherwise see. People wouldn't bring it to him. So, he's seeing what's going on at the low levels, really. I think that's really useful for him to help formulate strategies and direct the company - to see what's really going on.

And also, I mean - we're a pretty flat company anyway, but now anyone can talk to anyone. Anyone can just send the CEO a Slack message and ask his opinion on something.

How many people do, just out of interest?

Quite a few, yeah. Sometimes in channels, sometimes people just DM him. It does vary.

Many CEOs would be wary of such a drastic change. Did you have to push for approval on the plans?

I'm brave (/foolish), and want to be a bit more at the cutting edge, or certainly be where the future's going - even though most companies won't have got there yet. And actually, this is supported by our CEO.

So, our CEO is a bit of a geek, and is interested in new technology. He's an ex-PC Pro editor, was once UK Doom champion, you know - he's a bit of a geek. We geek out on tech and stuff, but he's not one of those people where it's technology for technology's sake - it is always with an end goal in sight. But he wants me to push the envelope and wants Dennis to push the envelope, and our staff do as well. We want the latest and greatest.