Apple and IBM: a new alliance 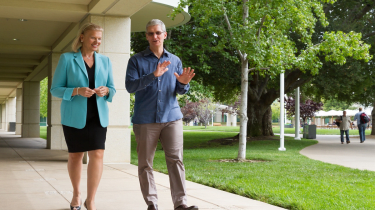 Inside the Enterprise: In recent years, Apple and IBM have enjoyed something of an uneasy truce. The companies fierce rivals at the dawn of the PC era have learned to live alongside each other since, as their business strategies have diverged.

IBM has gradually moved away from personal devices, exiting the handheld (yes, IBM made licenced Palm devices), PC and now low-end server market, to concentrate on enterprise technologies and services. Apple, for its part, has a less overt focus on the enterprise, emphasising its iOS device line rather than back end systems.

On the surface then, an arrangement between the two companies makes sense.Analystfirm Forrester describes it as "melding complementary strengths."

Certainly, IBM has technologies, especially around analytics and the cloud, that business users want to access on the move. Apple, for its part, has an operating environment that appeals to users, as well as an eye for design that few enterprise companies have succeeded in emulating.

As Apple points out, the vast majority of enterprises already use at least some iOS devices. But these have not always been well served with business software. IBM plans to create a slew of new apps for iOS, including industry-specific applications. These will include "native" apps for iOS, and will be based around IBM's portfolio of software for specific vertical markets.

IBM will support this with its big data and analytics capabilities. But, perhaps what's more interesting for IT teams, at least in the short term, isthe move to optimise IBM cloud services for iOS. This will include device management and securityin addition to mobile integration.

Under the new programme, known as IBM MobileFirst for iOS, IBM will also supply Apple devices, as well as packages including the devices, software and services. Apple will also be adding an AppleCare for Enterprise support scheme, with around the clock assistance.

The improvements in device management and support, in particular, means that the arrangement between the two companies should help IT teams to normalise the use of iOS devices within the business.

It might even help enterprises that have accepted the use of personally-owned Apple devices, perhaps under a BYOD scheme, to move towards a company-driven deployment. Having IBM as an integration partner cannot hurt Apple, when it comes to winning over sceptical CIOs.

But the new appliance may also succeed, where others have faltered, because it is focused on services and software, rather than low-level technology. Long-standing Apple watchers will remember the Apple-IBM-Motorola (AIM) alliance, based around computers, based in turn on PowerPC chips.

SomeIT directors might even recall the Apple Network Server range, PowerPC boxes designed specifically to run IBM's AIX OS. But these hardware-based ventures were very much of their time. Today's deal around software and services feels like it has more potential. But it may also be bowing to the inevitable.

Employees will continue to bring iOS devices to work. For companies like IBM, they may as well work with them rather than work against them.